Fig 1. Comparison of a typical eukaryotic cell with a typical prokaryotic cell (bacterium). The drawing on the left highlights the internal structures of eukaryotic cells, including the nucleus (light blue), the nucleolus (intermediate blue), mitochondria (orange), and ribosomes (dark blue). The drawing on the right demonstrates how bacterial DNA is housed in a structure called the nucleoid (very light blue), as well as other structures normally found in a prokaryotic cell, including the cell membrane (black), the cell wall (intermediate blue), the capsule (orange), ribosomes (dark blue), and a flagellum (also black). 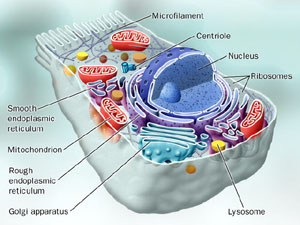 A eukaryotic cell is a cell that contains membrane-bound compartments in which specific metabolic activities take place. Most important among these compartments is the nucleus, which houses the eukaryotic cell's DNA. It is this nucleus that gives the eukaryote – literally, "true nucleus" – its name. Eukaryotic organisms also have other specialized, membrane-bounded structures, called organelles, which are small structures within cells that perform dedicated functions. Eukaryotic cells are typically 10 to 100 micrometers across, or about 10 times the size of prokaryotic cells.

The set of ideas most favored by biologists to explain how eukaryotic cells first came about is called the endosymbiotic theory. This theory is able to account well for the fact that two of the organelles found in eukaryotic cells, mitochondria and chloroplasts, have their own DNA that is completely distinct from the DNA housed in the nucleus. According to the endosymbiotic theory, the eukaryotic cell evolved from a symbiotic community of prokaryotic cells. Specifically, the mitochondria and the chloroplasts are what remains of ancient symbiotic oxygen-breathing bacteria and cyanobacteria, respectively, whereas the rest of the cell seems to be derived from an ancestral archaean (see archaea) prokaryote cell.

The origin of the eukaryotic cell was a milestone in the evolution of life. Although eukaryotes use the same genetic code and metabolic processes as prokaryotes, their higher level of organizational complexity has permitted the development of truly multicellular organisms. Without eukaryotes, the world would lack mammals, birds, fish, invertebrates, fungi, plants, and complex single-celled organisms.

All eukaryotic cells have a number of features in common. These include:

However, there are also some important differences between animal cells and plant cells.