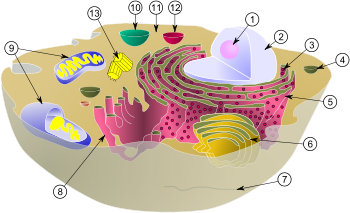 The cell nucleus is a membrane-bounded organelle which, in eukaryotic cells, houses the chromosomal DNA. It is the place where almost all DNA replication and RNA synthesis occur.

The nucleus is spheroidal in shape and separated from the cytoplasm by a double-membrane structure called the nuclear envelope. The nuclear envelope isolates and protects a cell's DNA from various molecules that could accidentally damage its structure or interfere with its processing. During processing, DNA is transcribed, or synthesized, into a special RNA, called mRNA. This mRNA is then transported out of the nucleus, where it is translated into a specific protein molecule. In prokaryotes, DNA processing takes place in the cytoplasm. Inside the nucleus of eukaryotes is the nucleolus.