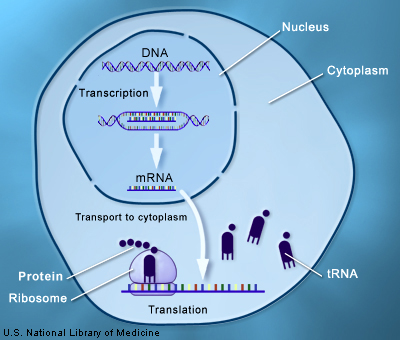 Transcription is the process in which the genetic information in DNA is transferred to a molecule of messenger RNA (mRNA) as the first stage in protein synthesis. DNA transcription takes place in the cell nucleus or nuclear region. An enzyme (transcriptase) moves along the DNA strand and assembles the nucleotides needed to make a complementary strand of mRNA.

Transcription is a process very similar to DNA replication, although it is directed by different proteins. The most important enzyme is RNA polymerase, which influences the synthesis of RNA from a DNA template. For transcription to be initiated, RNA polymerase must be able to recognize the beginning sequence of a gene so that it knows where to start synthesizing an mRNA. It is directed to this initiation site by the ability of one of its subunits to recognize a specific DNA sequence found at the beginning of a gene, called the promoter sequence. The promoter sequence is a unidirectional sequence found on one strand of the DNA that instructs the RNA polymerase in both where to start synthesis and in which direction synthesis should continue. The RNA polymerase then unwinds the double helix at that point and begins synthesis of a RNA strand complementary to one of the strands of DNA. This strand is called the antisense or template strand, whereas the other strand is referred to as the sense or coding strand. Synthesis can then proceed in a unidirectional manner.

Although much is known about transcript processing, the signals and events that instruct RNA polymerase to stop transcribing and drop off the DNA template remain unclear. Experiments over the years have indicated that processed eukaryotic messages contain a poly(A) addition signal (AAUAAA) at their 3' end, followed by a string of adenines. This poly(A) addition, also called the poly(A) site, contributes not only to the addition of the poly(A) tail but also to transcription termination and the release of RNA polymerase from the DNA template. Yet, transcription does not stop here. Rather, it continues for another 200 to 2000 bases beyond this site before it is aborted. It is either before or during this termination process that the nascent transcript is cleaved, or cut, at the poly(A) site, leading to the creation of two RNA molecules. The upstream portion of the newly formed, or nascent, RNA then undergoes further modifications, called post-transcriptional modification, and becomes mRNA. The downstream RNA becomes unstable and is rapidly degraded.

Although the importance of the poly(A) addition signal has been established, the contribution of sequences further downstream remains uncertain. A recent study suggests that a defined region, called the termination region, is required for proper transcription termination. This study also illustrated that transcription termination takes place in two distinct steps. In the first step, the nascent RNA is cleaved at specific subsections of the termination region, possibly leading to its release from RNA polymerase. In a subsequent step, RNA polymerase disengages from the DNA. Hence, RNA polymerase continues to transcribe the DNA, at least for a short distance.

In the synthesis of proteins, transcription is followed by protein translation.