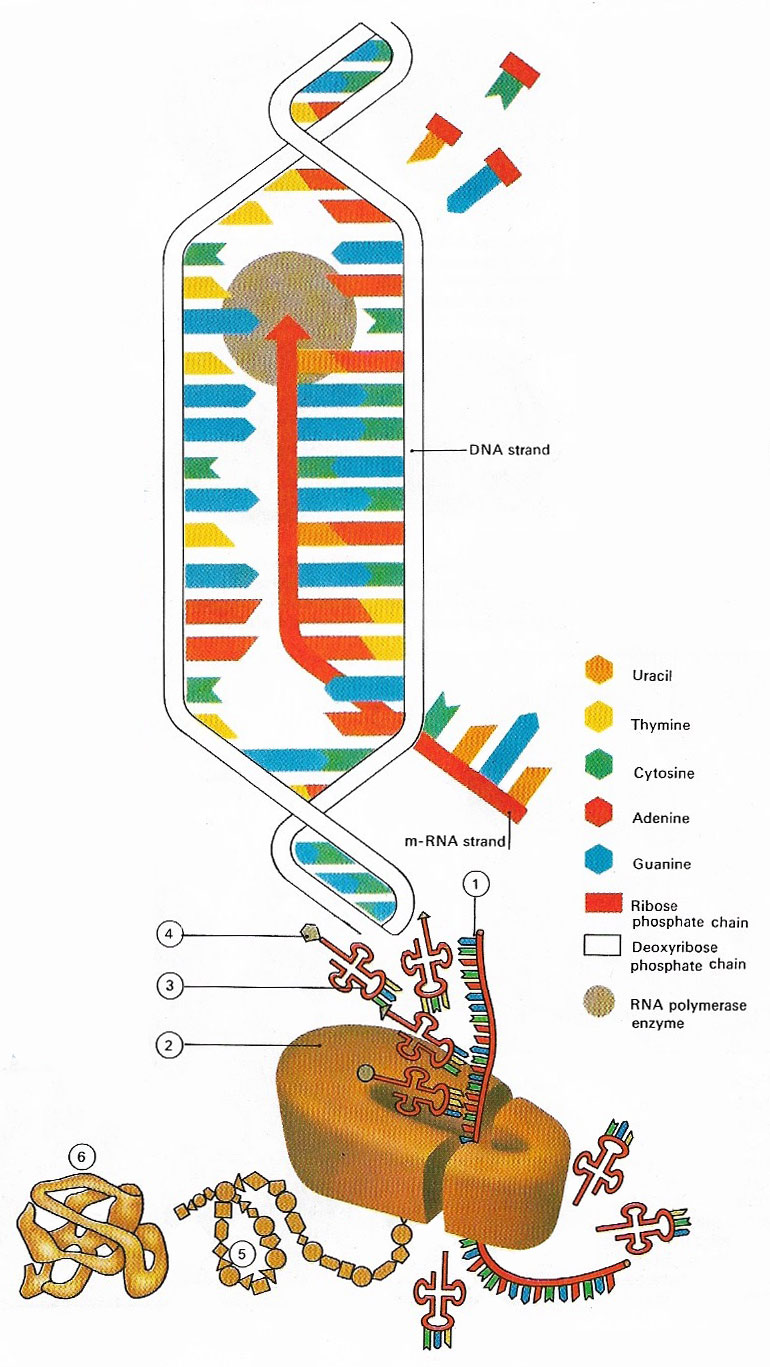 Fig 2. Messenger RNA molecules are made by using one DNA strand as a template. RNA is very similar to DNA but is single-stranded, the sugar backbone is modified, and the base uracil replaces thymine. RNA is transcribed from the DNA base sequence. The information encoded in the chromosome is required for the synthesis of protein structures in the cytoplasm of the cell. The messenger RNA (1) therefore moves to the cytoplasm where it joins up with ribosomes (2) so that proteins can be made from amino acids (4) transported by transfer RNA (3). As the new polypeptide chain emerges (5) it begins to fold into its characteristic shape.

RNA (ribonucleic acid) is a class of nucleic acids characterized by the presence of the sugar ribose and the organic base uracil. By contrast, DNA contains deoxyribose and thymine, respectively (Fig 1). Most RNA molecules, including messenger RNA and transfer RNA (see below), act as cellular intermediaries; that is, they convert the genetic information stored in DNA into the proteins that provide cells with structure and enable them to carry out metabolism. In some viruses, RNA also serves as the hereditary material.

Biologists believe that RNA evolved on Earth before DNA. However, a major debate is in progress about the sequence of events leading to the first cellular life-forms, and, in particular, about which came first, RNA or proteins.

Messenger RNA (mRNA) is a molecule of RNA that serves as a template for protein synthesis. mRNA is transcribed from a gene and then translated by ribosomes in order to manufacture a protein. Each set of three bases, called codons, specifies a certain protein in the sequence of amino acids that comprise the protein. The sequence of a strand of mRNA is based on the sequence of a complementary strand of DNA (Fig 2).

An intron is a portion of messenger RNA (mRNA), as transcribed from the DNA of a eukaryote, which is removed by enzymes before the mRNA matures and is transplanted into protein. The portions of mRNA that remain after the excision of the introns are known as exons (Fig 3).

An exon is the region of a gene that contains the code for producing the gene's protein. In other words, an exon is a section of DNA that is both translated and transcribed into a protein. Each exon codes for a specific portion of the complete protein. In some species (including humans), a gene's exons are separated by long regions of DNA called introns, or "junk DNA," that have no apparent function.

Transfer RNA (tRNA) is a class of small RNA's, each containing about 80 nucleotides. A tRNA molecule has two functional sites. At one of these sites, an activating enzyme adds a specific amino acid. The other functional site carries the anticodon codon) specific for that amino acid. Each type of tRNA transfers one particular amino acid to a growing polypeptide chain as specified by the nucleotide sequence of the messenger RNA being translated (Fig 4).

François Jacob was a French biologist who, with Jacques Monod, discovered that a substance, which they named messenger RNA, carried hereditary information from the cell nucleus to the sites of protein synthesis and that certain genes, called operator genes, control the activity of others. They shared the 1965 Noble Prize in Physiology or Medicine with another French biologist, André Lwoff.

The 'RNA world' is one of the scenarios suggested for the protobiological regime that existed on Earth nearly 4 billion years ago, prior to the appearance of DNA (see life, origin). Advocates of the RNA world hypothesis argue that RNA must have come before the first proteins, since without it there would have been no molecule of heredity – no "blueprint" molecule – and therefore no way for other molecules to have been manufactured consistently. According to this idea, there was a time when RNA alone handled all of the tasks required for a cell to survive, acting as both a genetic material and a catalyst for the various reactions involved in metabolism and for its own assembly. This last possibility was given credence by the discovery of some varieties of RNA, known as ribozymes, that can act as their own enzymes, snipping themselves in two and splicing themselves back together. Only with the evolution of DNA, the theory goes, was there a reallocation of labor with the more stable DNA molecule assuming the role of genome carrier and the more versatile protein-based enzymes taking on the job of biochemical catalysts.

A significant sticking point is how RNA, self-catalyzing or not, arose in the first place. Until recently, two of RNA's building blocks, cytosine and uracil, had proven difficult to synthesize under the sort of conditions that might have prevailed on Earth about 4 billion years ago. However, in Jun1995, Stanley Miller and Michael P. Robertson, at the University of California, San Diego, reported1 that they had been able to synthesize cytosine and uracil under plausible prebiotic conditions. The technique involved placing urea and cyanoacetaldehyde in an environment equivalent to that of a warm tidal pool. As evaporation concentrated the mixture, the chemicals reacted to yield cytosine and uracil in large amounts.

Further support for the RNA world view came in 1998 from researchers at Massey University in New Zealand.2 They developed a picture of a hypothetical RNA-based organism, which they named Riborgis eigensis after the German biologist Manfred Eigen. In their view, R. eigensis would have had its genes strung out along a set of linear chromosomes so that it had more in common with the genetic organization of eukaryotes than it did with the single, circular chromosome found in the cells of prokaryotes. Their reasoning stems from the fact that RNA, being less stable than DNA, is less reliable as a basis for molecular replication. Moreover, there is a limit to the size of a genome, known as the Eigen limit, determined by the propensity for error of the replicating mechanism. Since the Eigen limit for RNA is relatively low, an RNA-based organism might best get around this problem by holding its genome on several short chromosomes and also by keeping several copies of these in case one or two become corrupted. A drawback of linear chromosomes is that they suffer from a tendency toward frayed ends. Eukaryotes counter this tendency with telomerase, an enzyme that maintains the telomeres with which the ends of chromosomes are capped. Telomerase, as it happens, is guided in its task by an RNA molecule, suggesting that a similar substance might have been used for chromosome maintenance by R. eigensis. This would tie in with the Massey team's unconventional idea of linear chromosomes in RNA-based organisms predating the simple chromosome rings of bacteria. Once proteins evolved, so the argument goes, they took on all the new catalytic functions of evolving organisms, leaving RNA with only the jobs it performed in the pre-protein era. So, if to terminate chromosomes calls for RNA, then chromosome ends must have been in existence before there were proteins. Since prokaryotes lack telomerase, the implication is that they lost their catalytic RNA after they had evolved from more complex cells.

Similar reasoning can be applied to the evolutionary history of ribosomes. If the RNA world view is correct, these most elaborate of RNA-containing structures, which are now involved with protein synthesis, must have had a different role before proteins existed. One possibility is that they were used to replicate RNA. Protoribosomes may have taken small strands of RNA from their surroundings and cut and pasted those which matched their template into a new, duplicate strand.

Opponents of the RNA world picture point to the chemical fragility of RNA and the fact that it is difficult to synthesize abiotically. According to some biologists, proteins must have evolved first because only they can furnish the full range of enzymatic capabilities needed to support even the most primitive form of life. Other researchers believe that, instead of evolving independently, RNA and proteins may have evolved together in the earliest of protocells. Yet, if such was the case, it is not clear how the division of cellular functions between these molecules took place.

Even supporters of the RNA world suspect that a molecule as complex as RNA was not manufactured at a stroke but evolved from some simpler self-replicating molecule. Stanley Miller and Leslie Orgel are among those who have suggested that RNA probably took over from some more primitive precursor. Orgel and his group, at the Salk Institute for Biological Studies in San Diego, have studied a compound known as peptide nucleic acid (PNA) which has the ability to replicate itself and catalyze reactions but is much simpler than RNA. They showed that PNA can act as a template both for its own replication and for the formation of RNA from its subcomponents. Although, Orgel's team has not claimed that PNA itself may have been the primordial replicator (since it is not clear how this substance could have arisen under plausible prebiotic conditions) their work demonstrates that the evolution of a more complex self-replicating molecule from a simpler precursor is at least possible.