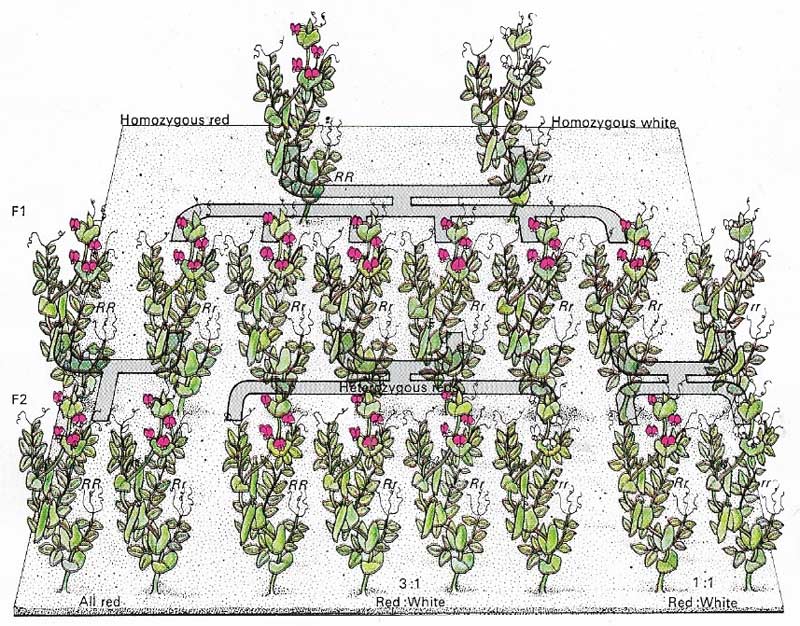 Fig 1. Mendel used garden peas to demonstrate dominant and recessive inheritance. Pure-breeding plats were assumed to carry two genes (to be homozygous) for red (RR) or white (rr) flowers. The first (F1) generation of progeny were all red, suggesting that the red gene was dominant. All the members of this F1 generation were this Rr in constitution. This was proved in the second (F2) generation back-crosses between the two parental types and the F1 off-spring. All the progeny of red-red crosses were red. Of the red-white crosses half were red and half white. Crosses between F1 progeny gave a 3:1 ratio of red to white flowers. 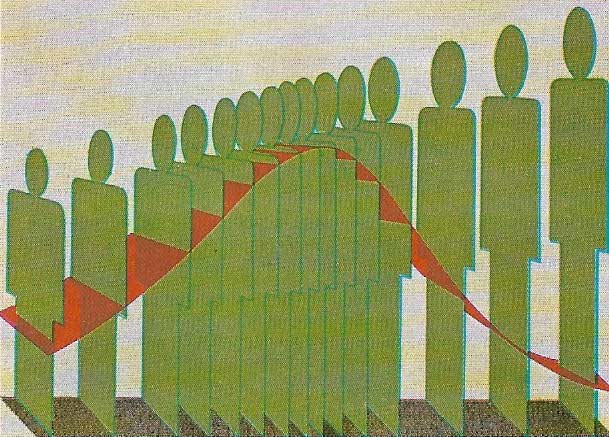 Fig 2. In Mendel's early experiments he dealt with traits that were either one thing or the other – red flowers or white; wrinkled peas or smooth. But because most characters are influenced by more than one gene they tend to appear in a kind of spectrum. Height in humans spreads from short to tall, but because there is pool of genes contributing to this factor there is a so-called normal distribution with an average in the middle between extremes,

Heredity is the transmission of physical and other characteristics from one generation of plants or animals to the next. Also, the process whereby progeny resemble their parents in many features but are not, except in some microorganisms, an exact duplicate of their parents.

Patterns of heredity for a long time puzzled biologists and it was not until the researches of Gregor Mendel, an Austrian monk, that any numeric laws of heredity were discovered. Although Mendel's work was published in the mid-1860s, it went ignored by the majority of biologists until the opening of the twentieth century.

Mendel showed that hereditary characteristics are passed on in units called genes. When gametes (reproductive cells) are formed by meiosis, the genes controlling any given characteristic segregate and become associated with different gametes. Thus, if the height of a pea plant is controlled by the genes T (for tallness) and t (for shortness) and pollen from a pure-breeding dwarf strain (of genotype tt) is used to fertilize ovules of a pure-breeding tall strain (of genotype TT), the resulting plants (of the "first filial" – F1 – generation), are of genotype Tt. Now the gametes of the F1 generation contain equal numbers of genes T and t, both in the pollen and the ovules. The second filial (F2) generation thus contains 50% of the heterozygous gene Tt, together with 25% each of the homozygous genes TT and tt. In many cases, the heterozygote is indistinguishable from one of the homozygotes. In this case the gene that is expressed in the heterozygous condition is called a dominant gene; that which only manifests itself when homozygous is termed recessive. In the case of Mendel's peas, since T was dominant and t recessive, in the F1 generation (100% Tt) all the plants were tall, while in the F2 generation 75% were of the tall phenotype (i.e., the 25% TT and the 50% Tt) and 25% (the tt) of the short one (Fig 1).

Mendel also showed that when two or more pairs of genes segregate simultaneously the distribution of any one is independent of the distribution of the others. This work was done by crossing peas pure-breeding for round yellow seeds (RRYY) with peas pure-breeding for wrinkled green seeds (rryy). All the first-cross seeds were round yellow showing that round is dominant over wrinkled and yellow over green. The possible number of genotypes at second cross is 16, but only 4 phenotypes appeared: in the ratio of 9 round yellow seeds, to every 3 round green, 3 wrinkled yellow, and 1 wrinkled green. This independent segregation applies only to genes on different chromosomes; genes on the same chromosome are "linked" and do not segregate independently.

It is now known the genes are normally located on the chromosomes in the nucleus of the cell. Each chromosome carries many genes which may be transmitted together and are said to be in coupling. However, genes are exchanged between chromosome pairs so that recombination occurs. Because of the occurrence of recombination the linkage of genes is not complete.

In the vast majority of animals and higher plants sex is determined by a special sex chromosome which in humans is the XY chromosome. Men are XY and women XX so that all ova are X while a sperm is either X or Y. Therefore there should be an equal number males and females in a population. In practice Y-bearing sperm are more successful in fertilizing ova than X, so that more boys are born than girls.

Genes not only replicate themselves to pass on genetic information and direct the synthesis of proteins within individual cells, they also interact with each other both directly at the chromosomal level and indirectly through gene products. Although a particular characteristic of an organism is probably under the control of a single gene, the characteristic may be modified by a large number of other genes. For example, mice have a gene which can either slightly shorten the tail or result in early death through kidney failure, depending on the presence of other genes. Other genes exist for the sole function of suppressing the effects of another gene. The translocation of genes on chromosomes probably plays an important role in gene interaction.

In most organisms the majority of abnormal or mutant genes are recessive. But in humans mutant genes tend either to be dominant or show no dominance. As people generally avoid marrying close relatives, different combinations of genes are always being formed which give rise to the great variation seen among human beings. A reduction of variability occurs in thoroughbred animals where matings are controlled so as to select for desired constant features.

The gene pool is all of the genes and their various alleles, that occur in all the members of a particular species or population of species at any given moment. For a species to be vigorous and survive, the gene pool must be large enough for natural variation to take place through cross-fertilization. A large population does not necessarily imply a large gene pool, however. For example, there is concern about the viability of some sizeable populations of cheetahs which, despite their numbers, have insufficient variation in the gene pool.