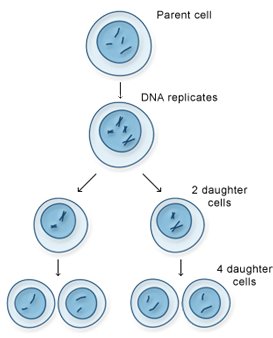 Meiosis is a specialized type of cell division that occurs during the formation of gametes. Although meiosis may seem much more complicated than mitosis, it is really just two cell divisions in sequence. Each of these sequences maintains strong similarities to mitosis.

Meiosis I refers to the first of the two divisions and is often called the reduction division. This is because it is here that the chromosome complement is reduced from diploid (two copies) to haploid (one copy). Interphase in meiosis is identical to interphase in mitosis. At this stage, there is no way to determine what type of division the cell will undergo when it divides. Meiotic division will only occur in cells associated with male or female sex organs. Prophase I is virtually identical to prophase in mitosis, involving the appearance of the chromosomes, the development of the spindle apparatus, and the breakdown of the nuclear envelope. Metaphase I is where the critical difference occurs between meiosis and mitosis. In mitosis, all of the chromosomes line up on the metaphase plate in no particular order. In Metaphase I, the chromosome pairs are aligned on either side of the metaphase plate. It is during this alignment that the chromatid arms may overlap and temporarily fuse, resulting in what are called crossovers. During Anaphase I, the spindle fibers contract, pulling the homologous pairs away from each other and toward each pole of the cell. In Telophase I, a cleavage furrow typically forms, followed by cytokinesis, the changes that occur in the cytoplasm of a cell during nuclear division; but the nuclear envelope is usually not reformed, and the chromosomes do not disappear. At the end of Telophase I, each daughter cell has a single set of chromosomes, half the total number in the original cell, that is, while the original cell was diploid; the daughter cells are now haploid.

Meiosis II is simply a mitotic division of each of the haploid cells produced in Meiosis I. There is no Interphase between Meiosis I and Meiosis II, and the latter begins with Prophase II. At this stage, a new set of spindle fibers forms and the chromosomes begin to move toward the equator of the cell. During Metaphase II, all of the chromosomes in the two cells align with the metaphase plate. In Anaphase II, the centromeres split, and the spindle fibers shorten, drawing the chromosomes toward each pole of the cell. In Telophase II, a cleavage furrow develops, followed by cytokinesis and the formation of the nuclear envelope. The chromosomes begin to fade and are replaced by the granular chromatin, a characteristic of interphase. When Meiosis II is complete, there will be a total of four daughter cells, each with half the total number of chromosomes as the original cell. In the case of male structures, all four cells will eventually develop into sperm cells. In the case of the female life cycles in higher organisms, three of the cells will typically abort, leaving a single cell to develop into an ovum (egg cell), which is much larger than a sperm cell.