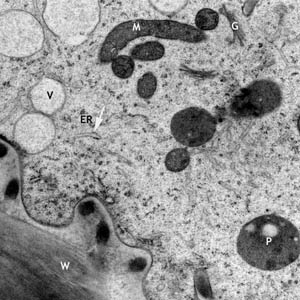 Cytoplasm is the jelly-like matrix that surrounds the nucleus of a cell and is bounded by the cell membrane. It includes the organelles of the cell as well as the sugars, amino acids, and proteins that the cell uses for growth and reproduction. Cytoplasm was formerly referred to as protoplasm. The portion of the cytoplasm that lies outside organelles and includes other insoluble cellular components is called cytosol.

Seen through an electron microscope, the cytoplasm appears as a three-dimensional lattice of thin protein-rich strands known as the microtrabecular lattice (MTL), which serves to interconnect and support the other solid structures in the cytoplasm. Cytoplasm is also the home of the cytoskeleton, a network of cytoplasmic filaments responsible for the movement of the cell and which gives the cell its shape.

The cytoplasm contains dissolved nutrients and salts, helps dissolve waste products, and is an excellent conductor of electricity. It facilitates the movement of materials around the cell by moving and churning through a process called cytoplasmic streaming. The nucleus often flows with the cytoplasm, changing shape as it moves.

Cytosol is the fluid portion of a cell's cytoplasm, which lies outside the organelles and other insoluble components of the cytoplasm. Cytosol contains water, free proteins, and a variety of other substances; yet, far from being a complex biochemical broth, it is actually highly organized at the molecular level. Most importantly, it is where a major part of cellular metabolism takes place. The proteins within cytosol play an important role in glycolysis, serve as intracellular receptors, and form part of ribosomes, enabling protein synthesis. Cytosol also contains the cytoskeleton.

In prokaryotes, all chemical reactions take place in the cytosol. In eukaryotes, the cytosol forms the surrounding environment of organelles. In plants, the amount of cytosol can be reduced due to the large tonoplast (central vacuole) that takes up most of the cell interior volume.