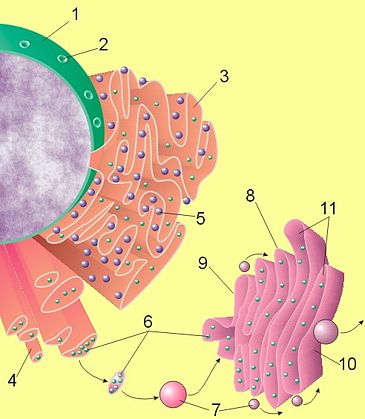 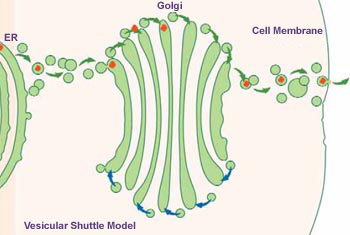 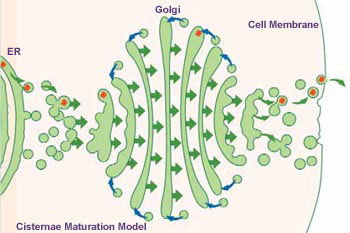 Found universally in both plant cells and animal cells, the Golgi apparatus is typically comprised of a series of five to eight cup-shaped, membrane-covered sacs called cisternae that look something like a stack of deflated balloons. In some unicellular flagellates, however, as many as 60 cisternae may combine to make up the Golgi apparatus. Similarly, the number of Golgi bodies in a cell varies according to its function. Animal cells generally contain 10 to 20 Golgi stacks per cell, which are linked into a single complex by tubular connections between cisternae. This complex is usually located close to the cell nucleus.

There is no connection to Golgi cells, which are types of neurons (nerve cells) within the central nervous system.


How the Golgi apparatus forms

There are different schools of thought concerning the formation of the Golgi apparatus. According to the vesicular shuttle model, the Golgi apparatus is an architectural structure that cannot be made from scratch. Instead, newly-made proteins are packaged in the rough ER and are sent for further processing to a pre-existing structure (the Golgi) that is made up of different compartments.

Opposing this is the cisternae maturation model which argues that the Golgi apparatus does indeed make itself from scratch. In this view, packages of processing enzymes and newly made proteins that originate in the ER fuse together to form the Golgi. As the proteins are processed and mature, they create the next Golgi compartment.

Intriguing new data suggest that perhaps neither model is completely correct. This will likely lead to yet another hypothesis.

The Golgi apparatus is named after the Italian histologist (see histology) Camillo Golgi. He also developed a staining technique (1873), using silver nitrate, with which he was able to explore the nervous system in great detail. Golgi shared with Ramón y Cajal (1852–1934) the 1906 Nobel Prize in Physiology or Medicine.