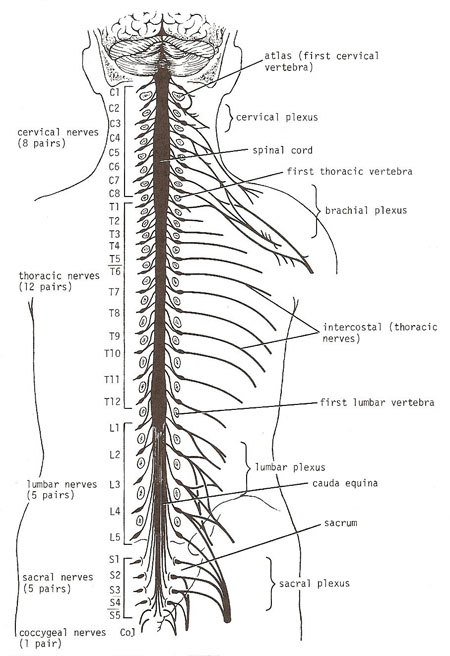 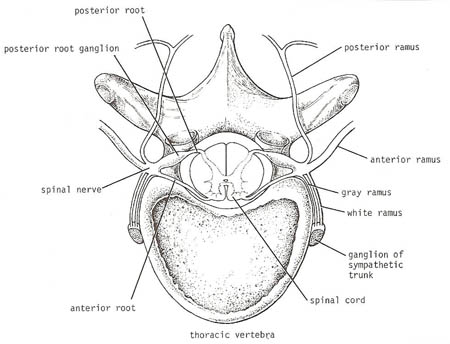 The association between spinal cord, spinal nerves, and sympathetic trunks.

The nervous system is the sum total of the tissues that record and distribute information, by electrical and chemical means, within the body of humans and other higher organisms.

In simple animals, such as the jellyfish and sea anemones, there is merely a nerve net without a center, or brain.

The central nervous system is composed of large numbers of neurons and their processes, supported by specialized tissue called neuroglia. The interior of the central nervous system is organized into gray matter and white matter. Gray matter consists of neurons and the proximal portions of their processes embedded in neuroglia. White matter consists of nerve fibers embedded in neuroglia.

In the peripheral nervous system the cranial and spinal nerves are cords of grayish white color. They are made up of bundles of nerve fibers supported by delicate areolar tissue.

There are 12 pairs of cranial nerves that leave the brain and pass through foramina in the skull. There are 31 pairs of spinal nerves that leave the spinal cord and pass through the intervertebral foramina in the vertebral column. The spinal nerves are named according to the regions of the vertebral column with which they are associated: 8 cervical, 12 thoracic, 5 lumbar, 5 sacral, and 1 coccygeal. Note that there are 8 cervical nerves and only 7 cervical vertebrae and that there are 1 coccygeal nerve and 4 coccygeal vertebrae.

Each spinal nerve is connected to the spinal cord by two roots: the anterior root and the posterior root. The anterior root consists of bundles of nerve fibers carrying nerve impulses away from the central nervous system. Such nerve fibers are called efferent fibers. Those efferent fibers that go to skeletal muscle and cause them to contract are called motor fibers. Their cells of origin lie in the anterior gray horn of the spinal cord.

It is important to realize that the classic division of the nervous system into central and peripheral parts is purely artificial and one of descriptive convenience, since the processes of the neurons pass freely between the two. For example, a motor neuron located in the anterior gray horn of the first thoracic segment of the spinal cord gives rise to an axon that passes through the anterior root of the first thoracic nerve, through the brachial plexus, travels down the arm and forearm in the ulnar nerve, and finally reaches the motor end plates on several muscle fibers of a small muscle of the hand – a total distance of about 90 cm (3 ft).

To take another example: Consider the sensation of touch felt on the lateral side of the little toe. This area of skin is supplied by the first sacral segment of the spinal cord (S1). The fine terminal branches of the sensory axon, called dendrites, leave the sensory organs of the skin and unite to form the axon of the sensory nerve and then in the tibial and sciatic nerves to the lumbosacral plexus. It then passes through the posterior root of the first sacral nerve to reach the cell body in the posterior root ganglion of the first sacral nerve. The central axon now enters the posterior white column of the spinal cord and passes up to the nucleus gracilis in the medulla oblongata – a total distance of about 1.5 m (5 ft). Thus, a single neuron extends from the little toe to the inside of the skull. Both these examples illustrate the extreme length of a single neuron.