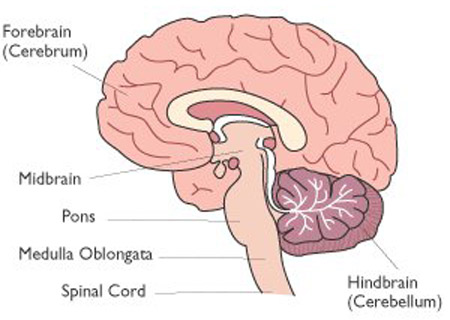 Coronal section of brain. The medulla oblongata lies between the spinal cord and pons. 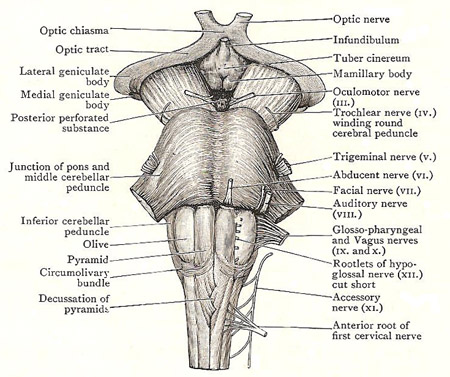 Anterior surface of the brainstem, comprising the medulla oblongata, pons, and midbrain.

The medulla oblongata, also called the myelencephalon, is the lowest part of the brainstem. The medulla oblongata looks like a swelling at the tip of the spinal cord; it is continuous with the spinal cord above the level of the foramen magnum of the occipital bone. From the level of the foramen magnum it proceeds almost vertically upward to end at the lower border of the pons. It is about 3 centimetersm (just over an inch) long.

Besides forming the major pathway for nerve impulses entering and leaving the skull, the medulla oblongata regulates the reflex responses that control breathing, heart beat, blood pressure, and other essential involuntary functions. It also contains part of the reticular formation that plays a role in arousal states, such as wakefulness and attention, and it gives rise to cranial nerves VI–XII. General anesthesia probably works by depressing medulla activity.


Further anatomy of the medulla oblongata

The anterior surface of the medulla oblongata is related to the basilar portion of the occipital bone, and its posterior part is sunk into the lower part of the anterior notch of the cerebellum. Its upper half shares in bounding the fourth ventricle of the brain, but its lower half is tunneled by a central canal which connects that ventricle with the central canal for the spinal cord.

Two linear rows of nerve rootlets are attached to each half of the medulla oblongata. The anterior row consists of the rootlets of the hypoglossal nerve. They are in line with the anterior roots of the spinal nerves; and they emerge along the bottom of a more or less distinct groove between the pyramid and the olive (see below). The posterior row is formed, from below upward, of the rootlets of the accessory nerve, vagus nerve, and glossopharyngeal nerve. They are in series with the posterior roots of the spinal nerves, and are attached to the floor of an indistinct, vertical groove whose upper part is a little behind the olive.

The pyramid is the bundle that lies alongside the anterior median fissure. It is composed of corticospinal fibers which arise in the motor area of the cerebrum, and descend in the internal capsule, basis penduculi, and the anterior part of the pons into the medulla oblongata. In the lower part of the medulla, three-quarters of its fibers cross in the decussation and form the lateral cerebrospinal tract; this tract descends in the lateral white column of the spinal cord, and its fibers arborise around the motor cells in the anterior gray column of the cord. The remaining quarter of the pyramid forms the anterior cerebrospinal tract; it descends along the anterior median fissure of the upper half of the cord, and comes to an end owing to its fibers having gradually crossed to arborise round motor cells of the opposite side of the cord.

A smooth oval swelling in the upper part of the medulla oblongata; it contains a mass of nerve cells, mainly gray matter. The olive is about 1.25 cm (half an inch) long and lies lateral to the pyramid. The elevation of the olive is produced by an underlying collection of gray matter, shaped like a corrugated vase – the olivary nucleus. The nucleus is probably concerned with equilibration, for a large bundle of fibers – the olivocerebellar tract – comes out of its mouth or hilum, crosses to the opposite side and enters the inferior cerebellar peduncle (see below), forming the chief bulk of it.

A thick, rope-like bundle that lies posterolateral to the olive. It begins about halfway down the medulla oblongata, and extends upward and slightly laterally, gaining bulk as it ascends. When it reaches the lower border of the back of the pons, it bends abruptly backward between the middle and superior peduncles to enter the cerebellum, where it spreads medially and backward like a fan. It is the chief connection between the medulla and the cerebellum, and its principal components are the olivocerebellar tract, the anterior and posterior external arcuate fibers, and the posterior spinocerebellar tract.

The inferior peduncle, however, does not form the whole of the surface district posterolateral to the olive. The peduncle and the olive are separated by a fairly wide but shallow groove. In the floor of that groove is a group of fibers so closely applied to the peduncle that they seem to be part of it. These are sensory fibers that form the sensory tract of the trigeminal nerve. The tract begins where the sensory root of that nerve enters the pons; it descends first through the substance of the pons, and then on the surface of the medulla; and it extends even into the spinal cord, where it ends at the level of the second cervical nerve. The rootlets of the ninth, tenth, and eleventh cranial nerves are a guide to its precise position in the medulla oblongata: the rootlets of the ninth and tenth pierce it; those of the eleventh are immediately in front of it. Its nucleus is a long column of gray matter that underlies it, and is the upward continuation of the substantia gelatinosa of the spinal cord.

The auditory nerve has a close relation to the inferior peduncle. It is a compound nerve consisting of two nerves – the cochlear nerve and the vestibular nerve, which is the nerve concerned with equilibration. The cochlear and vestibular nerves are united together in their course between the internal auditory meatus and the lower border of the pons. At that point they separate. The vestibular nerve passes backward between the peduncle and the spinal tract into the substance of the medulla to reach its nuclei, which lie, both in the medulla and in the pons, close to the floor of the fourth ventricle. The cochlear nerve curves backward round the side of the peduncle and ends in two nuclei – a dorsal and a ventral – that lie on the peduncle.

The fasciculus gracilis is the slender bundle that lies alongside the posterior median fissure. It ends halfway up the back of the medulla in a little prominence called the gracile tubercle. The fasciculus cuneatus is immediately lateral to the fasciculus gracilis; it extends to a slightly higher level, and ends in an ill-defined eminence called the cuneate tubercle. These fasciculi are composed of sensory fibers that arise in the ganglia of the spinal nerves. The fibers are carried by the posterior nerve roots into the spinal cord and ascend in the posterior white column into the medulla oblongata.

The gracile and cuneate tubercles lie immediately below the lower end of the inferior cerebellar peduncle. They are produced by the enlarged upper ends of the nucleus gracilis and nucleus cuneatus, which underlie the upper parts of the fasciculi, and in which the fibers of the fasciculi end. A large number of fibers arise in these nuclei. A few of them – the posterior external arcuate fibers – enter the inferior cerebellar peduncle at once, where they are joined by the anterior external arcuate fibers, and form its commencement. The course of the internal arcuate fibers is not so simple. They arch forward in fine bundles through the substance of the medulla, and cross the median plane, decussating with their fellows of the opposite side. Some of them may emerge between the pyramids as anterior external arcuate fibers; but the great majority bend upward and form the medial lemniscus – a large flat band that ascends, through the medulla, pons, and midbrain, conveying sensory impressions to the thalamus (a large mass of gray matter in the interior of the cerebrum).

These tracts occupy the surface area between the spinal tract of the trigeminal nerve and the groove which transmits the upper roots of the first cervical nerve. They are not marked off from each other, but each occupies about one half of the breadth of the area. The posterior spinocerebellar tract is the more lateral of the two. It extends upward in the side of the medulla and passes obliquely backward across the spinal tract of the trigeminal to join the inferior peduncle. The anterior spinocerebellar tract runs straight upward to the olive. Most of it disappears under cover of the olive, but a portion of it may be seen as a thin strip running up along its posterior edge. It then ascends to the pons, and, reaching its upper part, it bends backward and then runs downward in the superior peduncle into the cerebellum. The spinocerebellar tracts arise in the spinal cord, and convey to the cerebellum certain of the afferent impressions that reach the cord through the posterior nerve roots.

The white matter is, for the most part, at the surface. In the interior the white and the gray matter are to a large extent mingled.

Nerves associated with the medulla oblongata

The lower eight cranial nerves are connected with the medulla in greater or lesser degree; and the upper fibers of the anterior root of the first cervical nerve may arise in it.

The fifth cranial nerve is connected with the whole brainstem. It has a nucleus in the midbrain, more than one in the pons, and its spinal tract extends down the medulla oblongata into the spinal cord.

The sixth nerve belongs to the pons. Its only association with the medulla is that it pierces the upper end of the pyramid.

The ninth, tenth, and twelfth nerves belong wholly to the medulla oblongata; but only the upper part of the eleventh arises in the medulla.