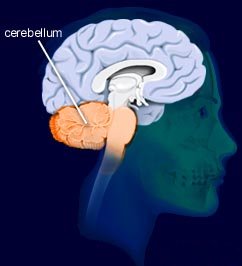 The cerebellum is a region of the brain (sometimes called the "little brain") concerned with the coordination of muscle movements. The cerebellum is essential for maintenance of muscle tone, balance, posture, the synchronization of activity in groups of muscles under voluntary control, and in converting muscular contractions into smooth coordinated movements. It is the largest part of the hindbrain and accounts for about 11% of the brain's total mass.

The cerebellum is a rounded structure with a convoluted surface, similar in appearance to the cerebrum. It is located behind the brainstem and connected to it by thick nerve tracts.

Outwardly, the cerebellum consists of two hemispheres flanking the vermis, which is a small protrusion from the brainstem. The cortex (outer part) of the hemispheres consists of numerous parallel ridges separated by deep fissures, so that only one sixth of the surface is visible. From the inner side of hemisphere, three nerve fiber stalks, or peduncles, arise; these link up with different parts of the brainstem. All the signals between the cerebellum and the rest of the brain travel along these nerve tracts. Under the microscope, a cross-section of the cerebellum shows the nerve fibers from these tracts fanning out toward the convoluted cortical surface. The cortex itself consists of gray matter (interconnected nerve cells) arranged in three main layers. Prominent in the middle layer are large cells called Purkinje's cells, each of which may interconnect with as many as 100,000 other cells.

Via its connections to the brainstem, the cerebellum receives information from organs such as muscle tendons and the balance organ of the inner ear. Much of this information concerns the body's posture and the state of contraction or relaxation of its muscles. Using this information, the cerebellum, working in concert with the basal ganglia, fine-tunes the orders sent to muscles from the motor cortex in the cerebrum, resulting in smoothly coordinated movements and balance.

Disease or damage to the cerebellum may result in cerebellar ataxia, characterized by jerky, staggering gait, slurred speech, and other uncoordinated movements. Alcohol intoxication impairs cerebellar function and thus may produce symptoms similar to those of cerebellar disease.