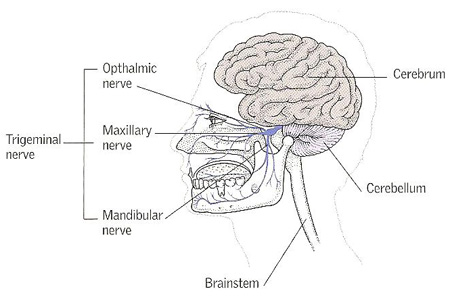 The trigeminal nerve is the fifth cranial nerve. It is the thickest of the cranial nerves, and has a wide distribution. Its motor fibers supply the four muscles of mastication (chewing) and four other muscles – tensor palati, tensor tympani, mylo-hyoid, and anterior belly of the digastric. Its sensory fibers supply: (1) part of the dura mater; (2) the eyeball (see eye) and other contents of the orbit; (3) the skin of face and anterior half of the head; (4) the mucous membranes of the air sinuses, nose, mouth, and anterior two-thirds of the tongue; (5) the teeth; (6) the mandibular joint (see mandible).

The mandibular division enters a canal in the lower jaw. The ophthalmic division enters the back of the orbit. The maxillary division runs in a canal between the orbital floor and the roof of the maxilla to emerge on the front of the cheek.

The motor root of the trigeminal arises in the pons and eventually joins the mandibular nerve as it leaves the skull.

The sensory and motor roots of the trigeminal nerve are enclosed in an adherent sheath of pia mater and a loose sheath of arachnoid mater that contains cerebrospinal fluid. Traced from the pons toward the ganglion, the two roots cross the medial part of the upper border of the petrous temporal bone through an aperture in the dura mater.

It occupies a space between the outer and inner layers of the dura mater called the cavum trigeminale, but is enclosed in a pocket or diverticulum of the inner layer which is prolonged over it from the lips of the aperture that transmits the roots. There are therefore two layers of dura mater above it and two below it; but the two below it are fused together. The motor root passes below the ganglion to join the mandibular nerve. The internal carotid artery is first below it in the carotid canal, and then medial to it in the cavernous sinus; and the sympathetic plexus around the artery is connected with the ganglion by communicating filaments. The ganglion is crescentic in outline, the concavity being directed upward and backward. The sensory root emerges from the concave border; and the three great divisions emerge from the convex border.


Sensory root of the trigeminal nerve


Motor root of the trigeminal nerve

This root is much smaller than the sensory root. It issues from the pons, runs along the sensory root, at first on its medial side and then below it, and descends under cover of the ganglion and mandibular nerve to the foramen ovale. There, it joins the mandibular nerve, which is therefore the only one of the three divisions of the trigeminal nerve that contains motor fibers.

This is a disorder of the trigeminal nerve in which brief episodes of severe, stabbing pain affect the cheeks, lips, gums, or chin on one side of the face. The disorder usually occurs in people over the age of 50. Pain may come in bouts that last for weeks at a time. The cause is uncertain, and pain is often brought on by touching the face, eating, drinking, or talking.