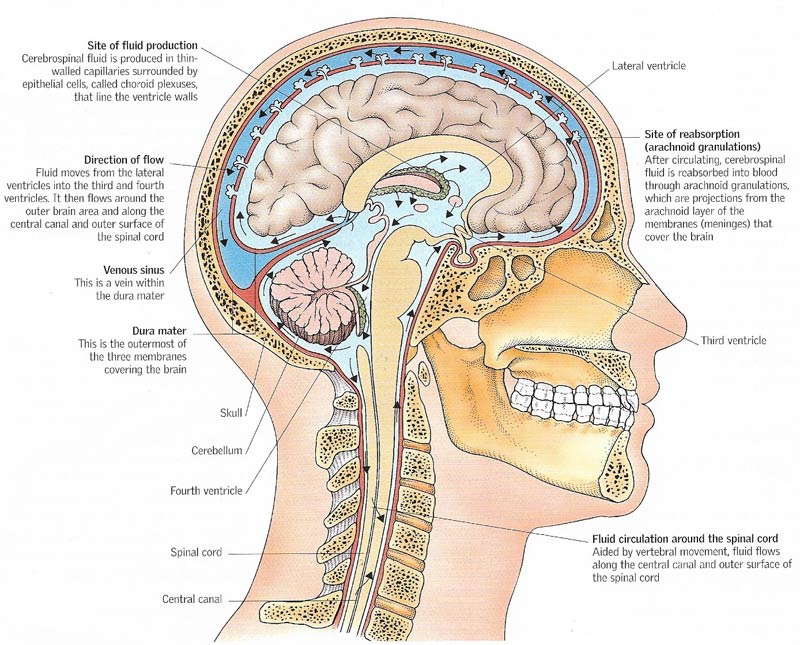 The cerebrospinal fluid (CSF) is a clear, colorless fluid that bathes the entire surface of the central nervous system and cushions the brain and spinal cord against concussion or violent changes of position. It is contained within a system of fluid-filled cavities called ventricles. An adult human has a total volume of 125–150 ml (less than a cupful) of CSF and produces 400–500 ml of it every day. Since it's replaced several times a day, CSF flushes the central nervous system.

The CSF is produced mainly by a structure known as the choroid plexus in the lateral, third and fourth ventricles. It flows from the lateral ventricle to the third ventricle through the interventricular foramen (also called the foramen of Monro). The third ventricle and fourth ventricle are connected to each other by the cerebral aqueduct (also called the aqueduct of Sylvius). CSF then flows into the subarachnoid space through the foramina of Luschka, of which there are two, and the foramen of Magendie.

Functions of the CSF include:

The CSF is normally maintained at a constant pressure which is related to the blood pressure in the great veins and is raised when venous tension is increased by coughing or straining. Any disease process or tumor within the cranium increases the CSF pressure as it expands, causing headache and nausea. Any block to the free flow of CSF results in damming-up, which balloons the brain to produce the condition known as hydrocephalus, or "water on the brain".

The composition of the fluid and its contained cells may be affected by disease, so examination of the fluid is often of value in diagnosis. While the cord ends at the first lumbar vertebra, its membranes continue as far as the sacrum. The lumbar spine thus encloses a space, or theca, filled with cerebrospinal fluid, and this may be entered by a long needle inserted between the spinous processes – a procedure known as lumbar puncture.