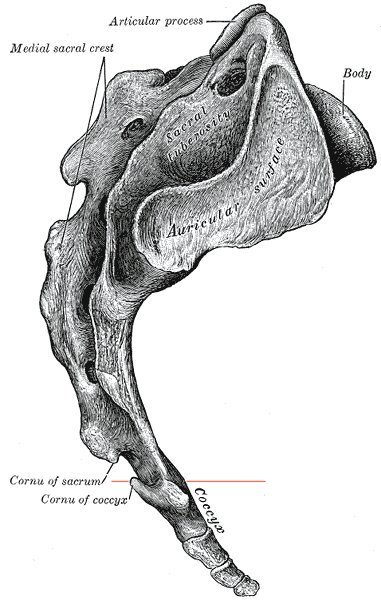 Sacrum and coccyx. The sacrum is the portion above the red line. 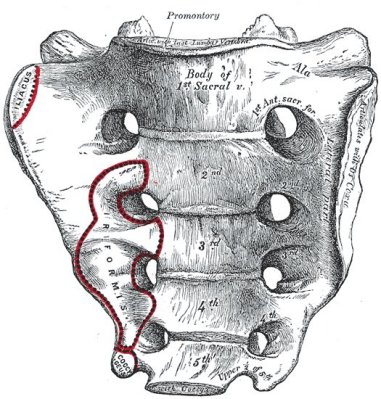 The sacrum, also called the sacral bone, is a large irregular triangule shaped bone in the lower part of the spinal column. It is made of five fused vertebrae (sacral vertebrae). The sacrum's broad upper part articulates with the fifth (lowest) lumbar vertebra. Between the two is a wedge-shaped intervertebral disk called the lumbosacral disk. The narrow lower part of the sacrum articulates with the coccyx. The spinal canal extends into the sacrum and the sacral nerves exit the canal through bony foramina (openings).

The sides of the sacrum are connected by the sacroiliac joints to each ilium (the largest of the bones that form the pelvis). The sacrum thus sits like a wedge in the center of the back of the pelvis. Many back problems occur where the lumbar and sacral region of the spine connect because certain activities subject this region to a lot of stress.


Disorders of the sacrum

Disorders of the sacrum include sacralgia, sacralization, and spondylolisthesis. Sacralgia is pain in the sacrum caused by pressure on a spinal nerve. It is usually the result of a disk prolapse. Rarely, it may be due to bone cancer.

Sacralization is fusion of the fifth (lowest) lumbar vertebra with the upper sacrum. It may be present at birth, in which case there are usually no symptoms. Sacralization may also be produced deliberately by a surgical procedure for the treatment of a disk prolapse or spondylolisthesis.