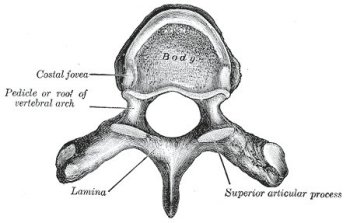 A typical thoracic vertebra, viewed from above. 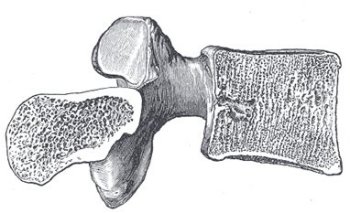 Sagittal section of a lumbar vertebra.

A vertebra is any of the bones that make up of the spinal column, or backbone, of a vertebrate. In humans, there are 26 vertebra, including:

A typical vertebra consists of two essential parts – an anterior segment, the body, and a posterior part, the vertebral or neural arch; these enclose a foramen (opening), the vertebral foramen. The vertebral arch consists of a pair of pedicles and a pair of laminae, and supports seven processes – four articular, two transverse, and one spinous.

When the vertebrae are articulated with each other the bodies form a strong pillar for the support of the head and trunk, and the vertebral foramina constitute a canal for the protection of the spinal cord (medulla spinalis), while between every pair of vertebrae are two apertures, the intervertebral foramina, one on either side, for the transmission of the spinal nerves and vessels.

Separating each vertebra is an intervertebral disk.

The body is the largest part of a vertebra, and is more or less cylindrical in shape. Its upper and lower surfaces are flattened and rough, and give attachment to the intervertebral fibrocartilages, and each presents a rim around its circumference. In front, the body is convex from side to side and concave from above downward. Behind, it is flat from above downward and slightly concave from side to side. Its anterior surface presents a few small apertures, for the passage of nutrient vessels; on the posterior surface is a single large, irregular aperture, or occasionally more than one, for the exit of the basivertebral veins from the body of the vertebra.

The pedicles are two short, thick processes, which project backward, one on either side, from the upper part of the body, at the junction of its posterior and lateral surfaces. The concavities above and below the pedicles are named the vertebral notches; and when the vertebrae are articulated, the notches of each contiguous pair of bones form the intervertebral foramina, already referred to.

The laminae are two broad plates directed backward and medialward from the pedicles. They fuse in the middle line posteriorly, and so complete the posterior boundary of the vertebral foramen. Their upper borders and the lower parts of their anterior surfaces are rough for the attachment of the ligamenta flava.

Spinous process (processus spinosus). The spinous process is directed backward and downward from the junction of the laminae, and serves for the attachment of muscles and ligaments.

Transverse processes (processus transversi). The transverse processes, two in number, project one at either side from the point where the lamina joins the pedicle, between the superior and inferior articular processes. They serve for the attachment of muscles and ligaments.


Structure of a vertebra

The body is composed of cancellous tissue, covered by a thin coating of compact bone; the latter is perforated by numerous orifices, some of large size for the passage of vessels; the interior of the bone is traversed by one or two large canals, for the reception of veins, which converge toward a single large, irregular aperture, or several small apertures, at the posterior part of the body. The thin bony lamellae of the cancellous tissue are more pronounced in lines perpendicular to the upper and lower surfaces and are developed in response to greater pressure in this direction. The arch and processes projecting from it have thick coverings of compact tissue.