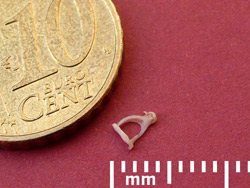 Figure 2. The stapes or stirrup bone, next to a 10 cent Euro coin.

The skeleton is a supportive and protective structure in humans and other animals, against which the force of muscles acts. A normal adult human skeleton consists of 206 named bones (or 213 if each of the nine fused vertebrae of the sacrum and coccyx are counted as independent bones). The individual bones of the skeleton are connected by three types of joints, which differ in the type and amount of movement they allow.

The 80 bones of the axial skeleton form the vertical axis of the body. They include the bones of the skull, spinal column, ribs, and sternum (breastbone). Of the 28 bones in the skull, 8 form the cranium that encases the brain; the rest are bones of the face, the ossicles of the middle ear, and the hyoid bone, which is suspended at the back of the jaw by muscles and a ligament and supports the base of the tongue.

The skull is attached to the top (superior end) of the spinal column, also called the spine or backbone. The spine has 33 vertebrae, stacked on one another to provide a flexible column that surrounds and protects the spinal cord. Arcing forward from the vertebrae are 12 pairs of ribs, most of which are attached at the front to the sternum, forming a protective cage (the rib-cage) around the heart and lungs.

The shoulders and upper limbs are made up of 64 bones. There are two bones in each shoulder: the clavicle (collarbone) and scapula (shoulder-blade); three in each arm – the humerus (upper-arm bone) and the radius and ulna (forearm bones); eight carpals in each wrist; five metacarpals in each palm; and 14 phalanges in the digits of each hand (two in each thumb and three in each finger).

The pelvic girdle consists of two innominate (hip) bones. There are 30 bones in each of the lower limbs: a femur (thigh-bone), a patella (kneecap), and tibia and fibula (lower-leg bones) in each leg; seven tarsals in the ankle, heel, and back part of the foot; five metatarsals in the middle of each foot; and 14 phalanges in the toes (two in each big toe and three in each other toe).


bones of the appendicular skeleton (126)


Function of the skeleton

The skeleton also supports and protects body organs, notably the brain and spinal cord, which are encased in the skull and spine, and the heart and lungs, which are protected by the ribs. The ribs also make breathing possible by supporting the chest cavity so that the lungs are not compressed, and by helping in the breathing movements themselves.

The skeleton is not an inert frame, however. It is an active organ that produces blood cells (formed in bone marrow) and acts as a reservoir for minerals such as calcium, which can be drawn on, if required, by other parts of the body.


Facts about the skeleton


Differences between male and female skeletons

There are only minor differences between the skeletons of men and women. In general, men's bones tend to be slightly larger and heavier than the corresponding bones in women. The female pelvic cavity is wider than that of the male to facilitate childbirth. For more details, see differences between male and female skeletons.


Skeletons of other animals

Vertebrates have a skeleton of bone or cartilage; arthropods have one made of chitin; while many other invertebrates use a hydrostatic skeleton, which is merely an incompressible fluid-filled region of their body.