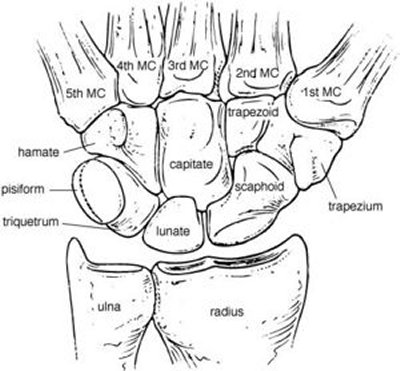 Fig 1. The bones of the carpus (wrist) and other bones with which they articulate. 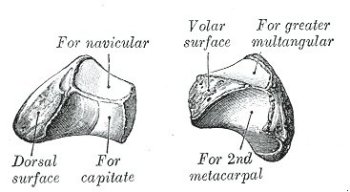 A carpal is any of the small bones (ossa carpi) in the wrist (carpus) or, in the case of four-legged animals (tetrapods) in the proximal part of the foot of the forelimb. The human hand contains eight carpals. Each articulates on the proximal side with the radius and ulna of the lower arm, and on the distal side with a metacarpal (see Fig 1).


common characteristics of the carpal bones

Each bone (excepting the pisiform) presents six surfaces. Of these the volar or anterior and the dorsal or posterior surfaces are rough, for ligamentous attachment; the dorsal surfaces being the broader, except in the navicular and lunate. The superior or proximal, and inferior or distal surfaces are articular, the superior generally convex, the inferior concave; the medial and lateral surfaces are also articular where they are in contact with contiguous bones, otherwise they are rough and tuberculated. The structure in all is similar, viz., cancellous tissue enclosed in a layer of compact bone.


bones of the proximal (upper) row

navicular bone (os naviculare manus; scaphoid bone) The navicular bone (Fig 2) is the largest bone of the proximal row, and has received its name from its fancied resemblance to a boat. It is situated at the radial side of the carpus, its long axis being from above downward, lateralward, and forward. The superior surface is convex, smooth, of triangular shape, and articulates with the lower end of the radius. The inferior surface, directed downward, lateralward, and backward, is also smooth, convex, and triangular, and is divided by a slight ridge into two parts, the lateral articulating with the greater multangular, the medial with the lesser multangular. On the dorsal surface is a narrow, rough groove, which runs the entire length of the bone, and serves for the attachment of ligaments. The volar surface is concave above, and elevated at its lower and lateral part into a rounded projection, the tubercle, which is directed forward and gives attachment to the transverse carpal ligament and sometimes origin to a few fibers of the Abductor pollicis brevis. The lateral surface is rough and narrow, and gives attachment to the radial collateral ligament of the wrist. The medial surface presents two articular facets; of these, the superior or smaller is flattened of semilunar form, and articulates with the lunate bone; the inferior or larger is concave, forming with the lunate a concavity for the head of the capitate bone.

The navicular articulates with five bones: the radius proximally, greater and lesser multangulars distally, and capitate and lunate medially.


lunate bone (os lunatum; semilunar bone) The lunate bone (Fig 3) may be distinguished by its deep concavity and crescentic outline. It is situated in the center of the proximal row of the carpus, between the navicular and triangular. The superior surface, convex and smooth, articulates with the radius. The inferior surface is deeply concave, and of greater extent from before backward than transversely: it articulates with the head of the capitate, and, by a long, narrow facet (separated by a ridge from the general surface), with the hamate. The dorsal and volar surfaces are rough, for the attachment of ligaments, the former being the broader, and of a somewhat rounded form. The lateral surface presents a narrow, flattened, semilunar facet for articulation with the navicular. The medial surface is marked by a smooth, quadrilateral facet, for articulation with the triangular.


pisiform bone (os pisiforme) The pisiform bone (Fig 5) may be known by its small size, and by its presenting a single articular facet. It is situated on a plane anterior to the other carpal bones and is spheroidal in form. Its dorsal surface presents a smooth, oval facet, for articulation with the triangular: this facet approaches the superior, but not the inferior border of the bone. The volar surface is rounded and rough, and gives attachment to the transverse carpal ligament, and to the flexor carpi ulnaris and abductor digiti quinti. The lateral and medial surfaces are also rough, the former being concave, the latter usually convex.

The pisiform articulates with one bone, the triangular.


bones of the distal (lower) row greater multangular bone (os multangulum majus; trapezium) The greater multangular bone (see Fig 6) may be distinguished by a deep groove on its volar surface. It is situated at the radial side of the carpus, between the navicular and the first metacarpal bone. The superior surface is directed upward and medialward; medially it is smooth, and articulates with the navicular; laterally it is rough and continuous with the lateral surface. The inferior surface is oval, concave from side to side, convex from before backward, so as to form a saddle-shaped surface for articulation with the base of the first metacarpal bone. The dorsal surface is rough. The volar surface is narrow and rough. At its upper part is a deep groove, running from above obliquely downward and medialward; it transmits the tendon of the Flexor carpi radialis, and is bounded laterally by an oblique ridge. This surface gives origin to the Opponens pollicis and to the Abductor and Flexor pollicis brevis; it also affords attachment to the transverse carpal ligament. The lateral surface is broad and rough, for the attachment of ligaments. The medial surface presents two facets; the upper, large and concave, articulates with the lesser multangular; the lower, small and oval, with the base of the second metacarpal.


lesser multangular bone (os multangulum minus; trapezoid bone) The lesser multangular (Fig 7) is the smallest bone in the distal row. It may be known by its wedge-shaped form, the broad end of the wedge constituting the dorsal, the narrow end the volar surface; and by its having four articular facets touching each other, and separated by sharp edges. The superior surface, quadrilateral, smooth, and slightly concave, articulates with the navicular. The inferior surface articulates with the proximal end of the second metacarpal bone; it is convex from side to side, concave from before backward and subdivided by an elevated ridge into two unequal facets. The dorsal and volar surfaces are rough for the attachment of ligaments, the former being the larger of the two. The lateral surface, convex and smooth, articulates with the greater multangular. The medial surface is concave and smooth in front, for articulation with the capitate; rough behind, for the attachment of an interosseous ligament.


capitate bone (os capitatum; os magnum) The capitate bone (Fig 8) is the largest of the carpal bones, and occupies the center of the wrist. It presents, above, a rounded portion or head, which is received into the concavity formed by the navicular and lunate; a constricted portion or neck; and below this, the body. The superior surface is round, smooth, and articulates with the lunate. The inferior surface is divided by two ridges into three facets, for articulation with the second, third, and fourth metacarpal bones, that for the third being the largest. The dorsal surface is broad and rough. The volar surface is narrow, rounded, and rough, for the attachment of ligaments and a part of the Adductor pollicis obliquus.

The capitate articulates with seven bones: the navicular and lunate proximally, the second, third, and fourth metacarpals distally, the lesser multangular on the radial side, and the hamate on the ulnar side.


hamate bone (os hamatum; unciform bone) The hamate bone (Fig 9) may be readily distinguished by its wedge-shaped form, and the hook-like process which projects from its volar surface. It is situated at the medial and lower angle of the carpus, with its base downward, resting on the fourth and fifth metacarpal bones, and its apex directed upward and lateralward. The superior surface, the apex of the wedge, is narrow, convex, smooth, and articulates with the lunate. The inferior surface articulates with the fourth and fifth metacarpal bones, by concave facets which are separated by a ridge. The dorsal surface is triangular and rough for ligamentous attachment. The volar surface presents, at its lower and ulnar side, a curved, hook-like process, the hamulus, directed forward and lateralward. This process gives attachment, by its apex, to the transverse carpal ligament and the Flexor carpi ulnaris; by its medial surface to the Flexor brevis and Opponens digiti quinti; its lateral side is grooved for the passage of the Flexor tendons into the palm of the hand. It is one of the four eminences on the front of the carpus to which the transverse carpal ligament of the wrist is attached; the others being the pisiform medially, the oblique ridge of the greater multangular and the tubercle of the navicular laterally. The medial surface articulates with the triangular bone by an oblong facet, cut obliquely from above, downward and medialward. The lateral surface articulates with the capitate by its upper and posterior part, the remaining portion being rough, for the attachment of ligaments.

The hamate articulates with five bones: the lunate proximally, the fourth and fifth metacarpals distally, the triangular medially, the capitate laterally.