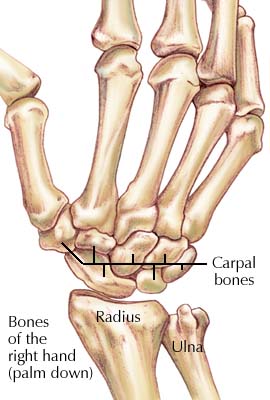 The wrist is the complex ellipsoidal joint between the hand and the arm; it allows the hand to bend forward and backward relative to the arm (through an angle of almost 180 degrees) and also move side to side (through about 70 degrees).

There are eight bones in the wrist, known collectively as the carpus. These are arranged in two rows: the scaphoid, lunate, triquetral, and pisiform bones, which articulate with the radius and the ulna; and the trapezium, trapezoid, capitate, and hamate, which are connected to the bones of the palm. The bones of of the carpus articulate with each other.

Also passing across the wrist are the arteries and nerves supplying the muscles, bones, and skin of the hand and fingers.


Disorders of the wrist

Wrist injuries may lead to serious disability by limiting the movement of the hand. This is especially likely to occur with fractures of the scaphoid bone, which often fail to heal, and with injuries in which the tendons or nerves in the wrist are severed.

A common wrist injury in adults is Colles' fracture, in which the lower end of the radius is fractured and the wrist and hand are displaced backward. In young children, similar displacement results from a fracture through the epiphysis (growing end) of the radius. A sprain can affect ligaments at the wrist joint, but most wrist sprains are not severe.

Pressure on the median nerve as it passes through the carpal tunnel causes numbness, tingling, and pain in the thumb, index, and middle fingers (see carpal tunnel syndrome). Damage to the radial nerve, which may be caused by fracture of the humerus (upper-arm bone), results in a wrist-drop (inability to straighten the wrist).

Other conditions that may affect the wrist include tenosynovitis (inflammation of the inner lining of a tendon sheath) and osteoarthritis.