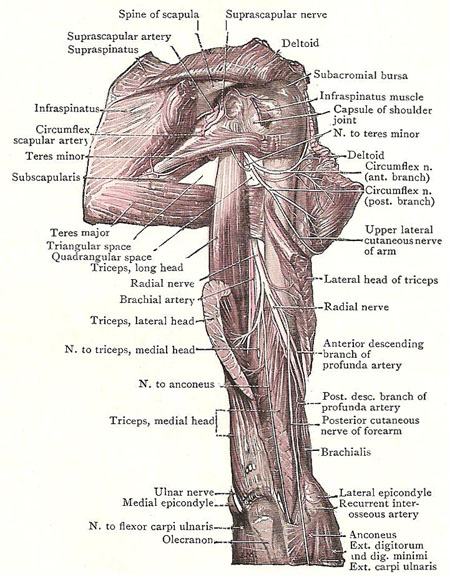 Dissection of the back of the shoulder and upper arm. The lateral head of the triceps has been divided and turned aside to expose the spiral groove on the humerus for the radial nerve.

The radial nerve is one of the main nerves of the arm, running from the shoulder to the hand. The radial nerve controls the muscles that straighten wrist. It also conveys sensation from the back of the forearm; the thumb, second and third fingers; and the base of the thumb.

The radial nerve is a terminal branch of the posterior cord of the brachial plexus. It is the thickest branch of that plexus; and like the ulnar nerve and median nerve, it extends from the axilla to the hand. The radial nerve at first descends behind the third part of the axillary artery and the proximal part of the brachial artery. But it soon leaves the front of the arm in the interval between the long and the medial head of the triceps, and enters the spiral groove. In that groove, it passes round the back of the humerus, under cover of the lateral head of the triceps; and, on the lateral side of the limb, it pierces the lateral intermuscular septum and passes into the anterior compartment of the arm. There, it lies deeply in the interval that separates the brachialis from the bracho-radialis and extensor carpi radialis longus. At the level of the lateral epicondyle of the humerus, it gives off the posterior interosseous nerve, and then descends, in front of the lateral part of the elbow joint, into the forearm.

The branches, which proceed from the radial artery, are muscular, cutaneous, and articular.

The part of the radial nerve, which is continued into the forearm, is cutaneous; but it does not pierce the deep fascia till it approaches the wrist; and its distribution is to the skin of the back of the hand and the digits.

The muscular branches are distributed to the three heads of the triceps, to the anconeus, to the lateral fibers of the brachialis, to the bracho-radialis, and to the extensor carpi radialis longus. The branches to the three last-named muscles spring from the trunk of the nerve after it has pierced the lateral intermuscular septum. The branch to the long head of the triceps arises from the axilla and pierces its anterior surface; those to the other heads of the triceps arise as the main nerve enters the spiral groove. In addition, the medial head receives on its antero-medial surface a long, slender branch that runs with the ulnar nerve in the upper arm. The branch to the anconeus, also long and slender, reaches the muscle through the substance of the medial head of the triceps.

The articular branches arise near the elbow, and supply the capsule of the elbow joint.

The posterior interosseous nerve has an extensive distribution to the muscles on the back of the forearm and to the radio-carpal and carpal joints.