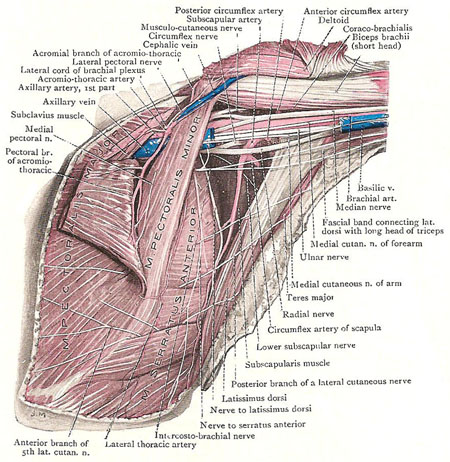 Axilla with muscles and vessels exposed.

The axilla, known commonly as the armpit, is a pyramid-shaped space between the upper part of the arm and the side of the chest. It forms an important passage for nerves, blood, and lymph vessels as they travel from the root of the neck to the upper limb.

The upper end of the axilla, or apex, is directed into the root of the neck and is bounded in front by the clavicle, behind by the upper border of the scapula, and medially by the outer border of the first rib. The lower end, or base, is bounded in front by the anterior axillary fold (formed by the lower border of the pectoralis major muscle), behind by the posterior axillary fold (formed by the tendon of latissimus dorsi and the teres major muscle), and medially by the chest wall.

The walls of the axilla are made up as follows:

The axilla contains the principal vessels and nerves to the upper limb and many lymph nodes.