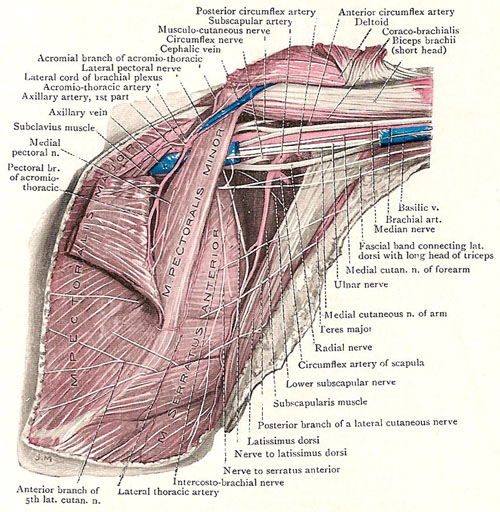 Pectoralis major and minor, and contents of the axilla.

The pectoralis major is a powerful muscle that extends from the front of the thorax to the humerus. It is divided by a deep fissure into a clavicular and sternocostal portions. The clavicular portion arises from the medial half of the front of the clavicle. The sternocostal portion takes origin (1) from the anterior surface of the sternum; (2) from the upper six costal cartilages, and (3) from the aponeurosis of the external oblique muscle of the abdomen.

The muscle is inserted by a flattened, bilaminar tendon, chiefly into the lateral lip of the bicipital groove of the humerus.

The pectoralis major is supported by the lateral and medial pectoral nerves. As a whole it is an adductor and medial rotator of the upper limb; and, when the limb is thrust forward or backward by movements of the scapula, the pectoralis major assists in pulling it back again to the vertical position. The clavicular head, acting with the anterior fibers of the deltoid muscle, is an active agent in flexion of the arm at the shoulder joint, a movement which can be reversed by the sternocostal head.