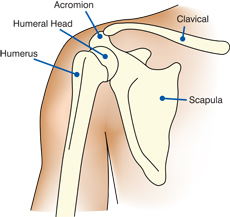 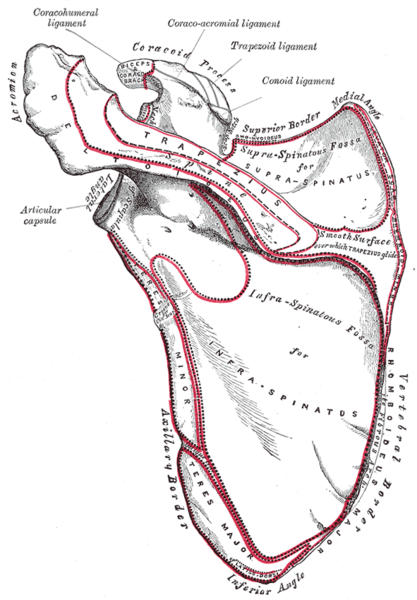 Dorsal surface of the scapula. 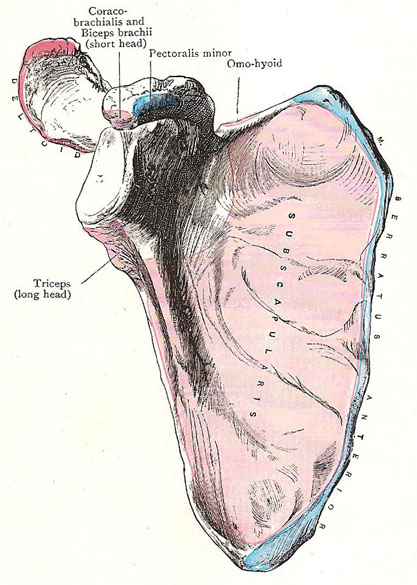 Costal aspect of the scapula with attachments of muscles mapped out.

The scapula, also called the shouder blade, is either of two large, roughly triangular flat bones found on either side of the upper back, and forming part of the pectoral (shoulder) girdle of humans and other vertebrates. The scapula provides for the firm attachment of muscles that move the forelimb and an articulation for the humerus at the glenoid cavity. It is joined to the clavicle in front.


Further anatomy of the scapula

The scapula lies on the posterior thoracic wall between the second and the seventh ribs. On its posterior surface the spine of the scapula projects backward. The lateral end of the spine is free and forms the acromion, which articulates with the clavicle. The superolateral angle of the scapula forms the pear-shaped glenoid cavity, or fossa, which articulates with the head of the humerus. The coracoid process projects upward and forward above the glenoid cavity and provides attachment for muscles and ligaments. Medial to the base of the coracoid process is the suprascapular notch.

Fractures of the scapula are usually the result of severe trauma, such as occurs in runover accident victims or in occupants of automobiles involved in crashes. Injuries are usually associated with fractured ribs. Fortunately, most fractures of the scapula require little treatment because the muscles on the anterior and posterior surfaces adequately splint the fragments.

The position of the scapula on the posterior wall of the thorax is maintained by the tone and balance of the muscles attached to it. If one of these muscles is paralyzed, this balance is upset, as in dropped shoulder, which occurs with paralysis of the trapezius, or winged scapula, which occurs with paralysis of the serratus anterior. Such imbalance can be detected by careful physical examination.