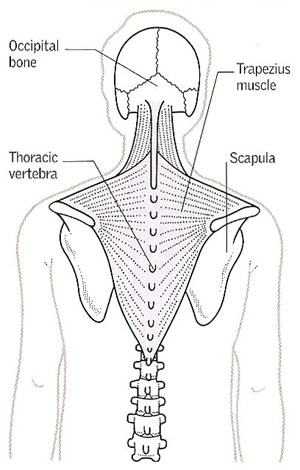 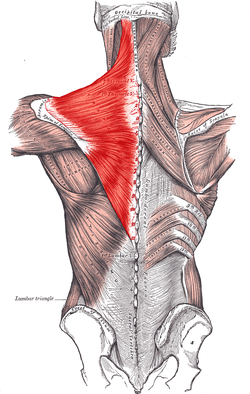 Trapezius and other muscles of the shoulder, neck, and back, from Gray's Anatomy (1918).

The trapezius is a large, diamond-shaped muscle that extends from the back of the skull down to the lower part of the spine in the chest and across the width of the shoulders. The trapezius is attached to the top and back of the scapula (shoulder blade) as well as to the outer part of the clavicle (collarbone). Its function is to help support the neck and spine; it is also involved in moving the arm.

The trapezius muscle suspends the shoulder girdle from the skull and spinal column. The upper fibers elevate the scapula. The middle fibers retract the scapula. The lower fibers pull the medial border of the scapula downward so that the glenoid cavity faces upward and forward. Knowing that the scapula rotates around the point of attachment of the coracoid process to the clavicle by the coracoclavicular ligament, it can be appreciated that the superior and inferior fibers of the trapezius assist the serratus anterior muscle in rotating the scapula when the arm is raised above the head.


Anatomy of the trapezius

The trapezius arises from the medial third of the superior nuchal line of the occipital bone, the external occipital protuberance, and the posterior border of the ligamentum nuchae; from the spine of the seventh cervical vertebrae and the spines and supraspinous ligaments of all the thoracic vertebrae.