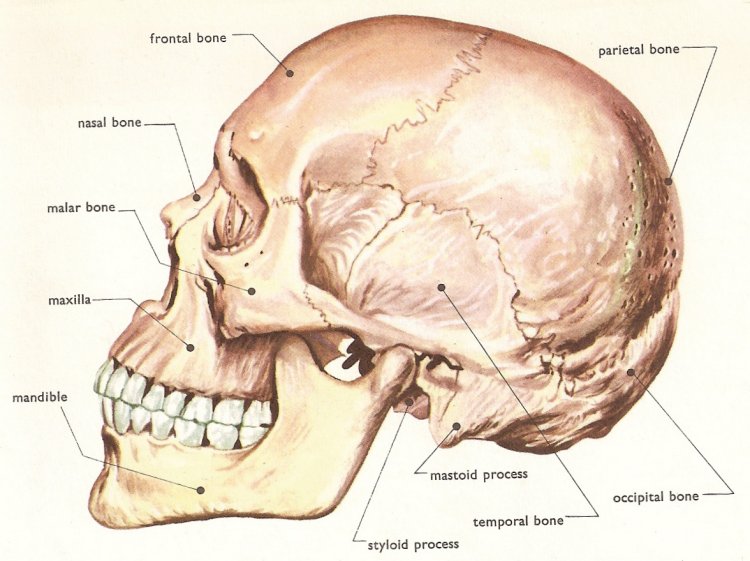 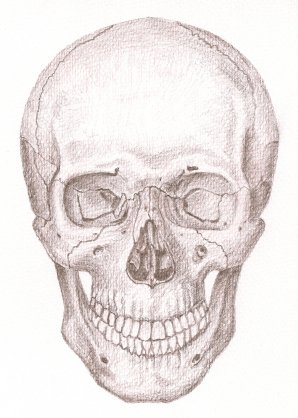 The skull is the bony casing of the head of humans and other vertebrates. The mammalian skull consists primarily of the cranium (the protective casing of the brain) and the bones of the face, which include the maxilla (upper jaw bone), mandible (lower jaw bone), zygomatic bones (cheekbones), and the nasal bones. Closely associated with, but not strictly part of, the skull are the hyoid (a small bone at the back of the tongue) and the auditory ossicles (three tiny bones in each middle ear).

A normal adult human skull has 8 bones in the cranium and 14 in the face. This makes a total of 29 if the 6 auditory ossicles and one hyoid are also included. None of these bones are moveable except for the joint between the lower jaw and the rest of the skull. The foramen magnum is a large opening at the base of the skull through which the spinal cord passes from the brain.

A human skull is almost full sized at birth. However the 8 bones that make up the cranium are not yet fused together. This means that the skull can flex and deform during birth, making it easier to deliver a baby through the narrow birth canal. The individual plates of bone fuse together after about 24 months to form the adult skull.

The cranium is made up of all of the bones of the skull except for the mandible (lower jaw bone). It consists of eight bones, including the brain case (calvarium) and the bones of the face, all of which, in adulthood, are fused together.

The eight bones of the cranium are the occipital, two parietal, frontal, two temporal, spheroid, and ethmoid bones. The 14 bones of the face, which surround the cavities of the mouth and nose and complete the orbits or cavities for the eyes, are the two nasal, two superior maxillary, two lachrymal, two zygomatic (malar), two palate, two inferior turbinated, vomer, and inferior maxillary.

The lower jaw articulates with the temporal bones by means of a diarthrodial joint, but all the others are joined by sutures. On the base of the cranium the occipital and sphenoid bones articulate by means of a plate of cartilage (synchrondrosis) in infants and children. In adults this becomes a bony union. Sutures are named for the bones between which they are found, but those around the parietal bones are given special names – for example, interparietal or sagittal; occipitoparietal or lambdoid; frontoparietal or coronal; parietal-temporal or squamous. During adult life many of the sutures close by bony union and disappear, but both the age at which this occurs and the order of occurrence are subject to variation.

Wormian bones are irregular ossifications found in relation to the sutures of cranial bones, but seldom seen in relation to the bones of the face. They are most frequent in relation to the lambdoid suture, and seldom one inch (2.5 cm) in diameter. The closure of a suture stops the growth of the skull along that line, and in order to compensate for this defect an increase of growth may occur at right angles to the closed suture and thus irregularities of form may result: for example, closure of the sagittal suture stops transverse growth, but the skull continues to grow in the longitudinal and vertical directions, with the result that a boat-shaped cranium is produced – scaphocephaly.

The bones of the skull are pierced by holes (foramina), and similar holes are found in relation to the adjacent margins of bones. Most of these foramina are situated in the base or floor of the skull, and are for the ingress of arteries and the exit of veins and cranial nerves. The largest of these foramina – the foramina magnum – is found in the occipital bone. It is situated immediately above the ring of the first cervical vertebra (the atlas), and through it the continuity between the brain and the spinal cord is established, and further, it transmits the vertebral arteries which supply blood to the brain.

Several of the skull bones, notably the maxillae, sphenoid bone, frontal bone, and ethmoid bone, contain sinuses (air-filled spaces); these sinuses are called the paranasal sinuses. In addition, there are sapces in the temporal bones that house the structures of the middle and inner ear.


human skull compared with that other animals

Compared with the skulls of other animals, the form of the human skull is modified (1) by the proportionately large size of the brain and consequent expansion of the the bones that surround it; (2) by the small size of the face, especially of the jaws, so that the human face, instead of projecting in front of, is under the forepart of the cranium; (3) by the erect attitude, which places the base of the skull at a considerable angle with the vertebral column, and, in consequence of a development backwards from the point of articulation with the vertebrae, the skull is nearly balanced on the summit of the vertebral column. Hence the orbits look forward and the nostrils look downward.


Development of the skull

At a very early stage of fetal development, the cerebrum is enclosed in a membranous capsule external to the dura mater, and in close contact with it. This is the first rudiment of the skull, the cerebral portion of which is consequently formed before there is any indication of a facial part. Soon, however, four or five processes jut from it on either side of the mesial line, which grow downward, incline toward each other, and unite to form a series of inverted arches, from which the face is ultimately developed. Imperfect development or ossification of these rudimentary parts of the face gives rise to a harelip and cleft palate. The cartilage, formed at the base of the membranous capsule, is quickly followed by the deposition of bony matter at various points of the capsule, which soon becomes converted into flakes of bone; while the intervening portions, which remain membranous, permit the skull to expand as its contents enlarge. Then follows the appearance of osseous nuclei in the cartilage at the base, corresponding to the future occipital and sphenoid bones. Lastly, the various bones, some originating in membrane, and some in cartilage, approach one another by gradual enlargement, and become united in various ways, so as to form a continuous, and ultimately an unyielding bone case, which is adapted for protecting the brain and sense organs, and for being attached to the ligaments and muscles by which the skull is supported and moved on the spine. At the time of birth most of the principal bones have grown into apposition with their neighbors, forming the sutures; but one large vacuity remains at the meeting-point of the parietal and frontal bones, which is called the anterior fontanelle (so called from the pulsations of the brain, which may be here seen resembling the rising of water at a spring or fountain. These are two fontanelles in the mesial line and two lateral fontanelles on either side, which do not close till the second year after birth, and sometimes remain open much longer. The deficiency of the osseous brain-case at this position not only facilitates delivery, but also acts to some extent like a safety-valve, during the first months of infantile life, at which time the brain bears an unusually large proportion to the rest of the body. The sutures remain distinct long after the closure of the fontanelles, and serve a purpose both in permitting an increase in the size of the cranium by the growth of the bones at their edges, and in diminishing and dispersing vibrations from blows to the skull.