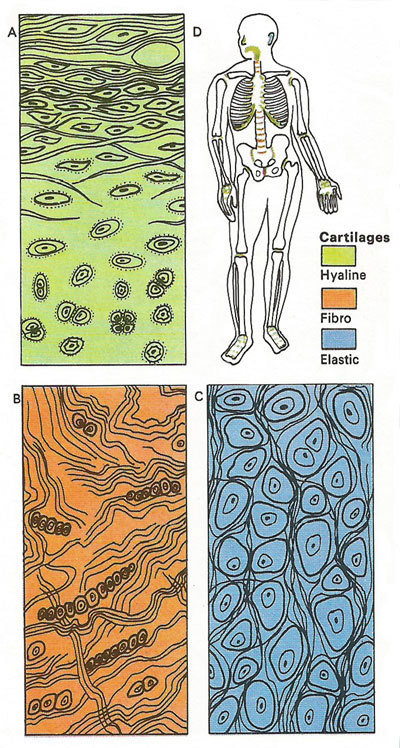 The three types of cartilage are composed of cells or chondrocytes that are embedded, either singly or in groups within cavities or lacunae, in different matrices. The enlarged cross-sections show (A) hyaline cartilage; (B) fibro-cartilage, which contains many collagen fibers; and (C) elastic cartilage with its cells surrounded by dense elastic fibers. (D) shows the locations of the different types in the body.

Cartilage is a dense, flexible type of connective tissue in which the functional component is the rubbery intercellular matrix that is secreted by cartilage-producing cells called chondrocytes. Although not as hard as bone, cartilage nevertheless forms an important structural component of many parts of the skeletal system, such as the joints. Much of the fetal skeletal is formed entirely of cartilage, which is then gradually converted to bone by a process called ossification.

Cartilage consists of chondrocytes embedded in a matrix, or ground substance, that comprises varying amounts of collagen.

Cartilage exists in several forms, from glassy to fibrous in appearance, and is capable of withstanding considerable pressure. Cartilage is commonly found in adults in the nose, ear, intervertebral disks, and tendons.

The simplest and commonest type of cartilage is hyaline cartilage, which is clear and glass-like. It joins the ends of the ribs to the sternum (breastbone), covers the ends of bones where these rub together at joints, and forms the lining of the trachea (windpipe).

Fibrous cartilage, or fibro-cartilage, is very tough and contains white fibers, but it is slightly elastic. It is found mainly in parts of the skeleton that are subject to extreme physical tension or compression. These include the disks between the bones of the backbone and the parts of tendons that are attached to the end of long bones.

Each mass of cartilage (except at the ends of bones) is surrounded by a sheath of tough connective tissue called the perichondrium. This sheath contains blood vessels from which food materials diffuse out to the cartilage cells. New cartilage cells are built up from the cells of the perichondrium. Cells on the inside of this layer break away and gradually turn into cartilage cells. They begin to secrete chondrin and each group of cells becomes separated by the accumulating matrix. A section through the cartilage shows that the cells near the edge are much closer together and less specialized than the older cells near the center.