Fig 1. Simplest of the freely movable or synovial joints are gliding joints (A), such as those between the carpal bones at the wrist. Movement is restricted by ligaments. Freely movable joints (B) contain fluid to lubricate bearing surfaces (1 bone, 2 cartilage, 3 synovial fluid, 4 synovial membrane, 5 tendon, 6 ligament.) Ball-and-socket joints (C) are found in the hip and shoulder. The socket grips the ball firmly, assisted by ligaments. The hip joints support the trunk's full weight. Internal ligaments (D) help to stabilize the knee joint. They cross within the joint, enclosed in synovial membrane where the femur and tibia articulate. Pivot joints (E) are found where the atlas and axis vertebrae articulate and between the radius and ulna. The former allows the head to turn, the latter the forearm to twist. Hinge joints (F) allow movement in only one plane, as at the knee, between the humerus and ulna at the elbow and between the bones of each finger and toe. The saddle joint (G) at the base of the thumb is so shaped that combinations of movements in different planes are possible allowing the pad of the thumb to meet the finger pads. 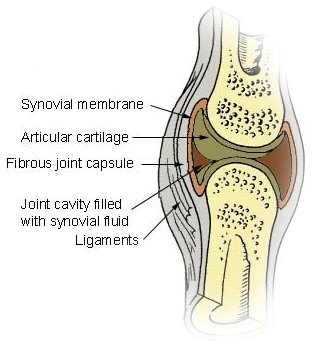 Fig 2. A synovial joint or diarthrosis. 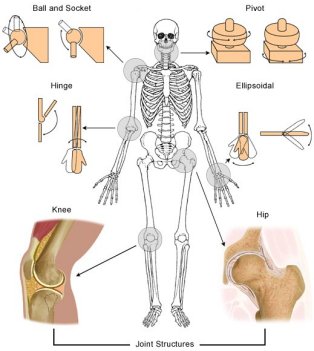 A joint, or articulation, is a place where two bones come together. All of the bones in the human skeleton, except for one (the hyoid bone in the neck), form a joint with another bone. In terms of the amount of movement they allow, there are three types of joints (see Figure 1):

Most joints in the adult body are diarthroses or synovial joints (Fig 2), which are freely movable joints. (The singular form is diarthrosis.) In this type of joint, the ends of the opposing bones are covered with hyaline cartilage, the articular cartilage, and they are separated by a space called the joint cavity. The components of the joints are enclosed in a dense fibrous joint capsule, also called an articular capsule. The outer layer of the capsule consists of the ligaments that hold the bones together. The inner layer is the synovial membrane that secretes synovial fluid into the joint cavity for lubrication.

Because all of these joints have a synovial membrane, they are sometimes called synovial joints.

Types of diathroses or synovial joints (Fig 3) include:

Fibrous joints, or synarthroses, are immovable joints. (The singular form is synarthrosis.) In these joints, the bones come in very close contact and are separated only by a thin layer of fibrous connective tissue. The sutures in the skull are examples of immovable joints.

The capsule and ligaments receive an abundant sensory nerve supply. The blood vessels receive autonomic sympathetic fibers. The cartilage covering the articular surfaces possesses only a few nerve endings near its edge. Overstretching of the capsule and ligaments produces reflex contraction of muscles around the joint; excessive stretching produces pain. The stretch receptors in the capsule and ligaments are continually sending proprioceptive information up to the central nervous system, keeping it informed of the position of the joints. The supplements the information passing to the nervous system from the muscle and tendon spindles, helps to maintain postural tone, and coordinates voluntary movements. The sympathetic fibers control the blood supply to the joint.

Hilton's law: A nerve supplying a joint also supplies the muscles moving the joint and the skin over the insertion of these muscles.

Ankylosis is the fusion or stiffness of a joint, restricting movement. It may be caused by injury, surgery, rheumatoid arthritis, and tuberculosis.