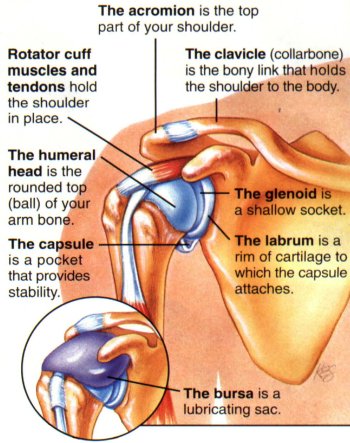 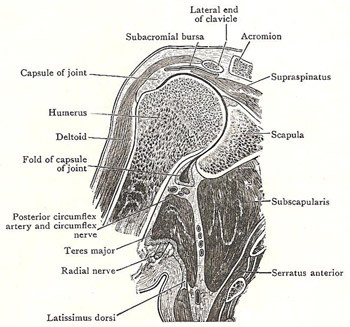 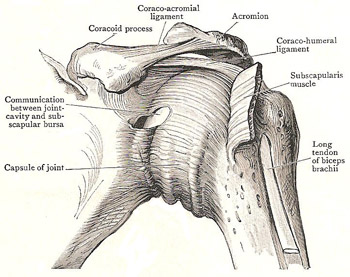 The shoulder is the area of the body where the arm attaches to the trunk. The rounded bony surface at the front of the shoulder is the upper part of the humerus (upper-arm bone); the bony surfaces that form the top and back of the shoulder are parts of the scapula (shoulder blade). The clavicle (collarbone) articulates with the acromion (the bony prominence at the outer top of the scapula) at the acromioclavicular joint and extends across the top of the chest to the sternum (breastbone), to which it is attached at the sternoclavicular joint.

Just below the acromion, on the outer wall of the scapula, is a socket, called the glenoid cavity, into which the head of the humerus fits to form the shoulder joint. A bursa (fluid-filled sac) under the acromion reduces friction at the joint. The shoulder joint is a ball-and-socket joint with a wide range of movement produced by part of the biceps muscle, several smaller muscles that make up the rotator cuff, various muscles in the chest wall, and the deltoid muscle (at the top of the upper arm and shoulder).

In no joint in the body are the movements so free and so varied as in the shoulder joint. This is necessary owing to the many functions performed by the upper limb. Freedom of movement is enabled in two ways: (1) by the large size of the head of the humerus, in comparison with the small, shallow glenoid cavity; (2) by the looseness of the capsule of the joint. These factors allowing for an extensive range of movements might, at first sight, suggest that the joint is not very secure. Certainly, its strength doesn't lie in the adaptation of the bony surfaces to each other, nor in the strength of the ligaments. Rather, it stems from: (1) the powerful muscles by which it is closely surrounded; (2) the coraco-acromial arch, which overhangs it and forms, as it were, a secondary socket for the head of the humerus, and effectively prevents upward displacement; and (3) atmospheric pressure, which exercises a strong influence in keeping the opposed surfaces in contact with each other.

On all aspects, except over a small area below, the capsule is supported by muscles, the tendons of which are more or less adherent to it. Above, it is covered by the supraspinitus; behind, the infraspinatus and teres minor are applied to it; in front, there is the subscapularis – which is also below the capsule near the scapula. Below, the capsule is otherwise unsupported by muscles, and there, in the ordinary dependent position of the limb, it bulges downward, in the form of a fold, into the upper part of the quadrangular space. When, however, the arm is abducted, the fold is obliterated, and the head of the bone rests upon the inferior part of the capsule, which now receives partial support from two muscles which are stretched under it, namely, the long head of the triceps and teres major. Nevertheless, this is the weakest part of the joint; and dislocation of the head of the humerus downward into the axilla, through the inferior part of the capsule, is consequently quite common. When the dislocation occurs, the circumflex vessels and nerve may be injured, as they are close to the capsule.