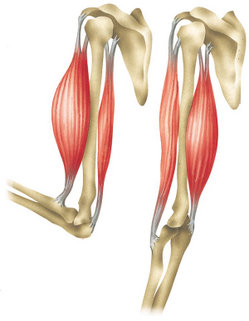 Back of the humerus with muscular attachments mapped out.

A triceps is any muscle that has three points of origin. Most commonly "triceps" refers to the triceps brachii muscle – a large extensor along the back of the upper arm in humans. It originates just below the socket of the scapula (shoulder-blade) and at two distinct areas of the humerus, the bone of the upper arm. The triceps extends downward and attaches to the upper part of the ulna, in the forearm.


Detailed anatomy of the triceps brachii

The triceps brachii muscle occupies the entire posterior osteo-fascial compartment of the arm. It arises by a long head from the scapula, and by two shorter heads, lateral and medial, from the humerus. The fleshy fibers of the three heads join a common tendon which is inserted into the upper surface of the olecranon.

The superficial part of the muscle is, for the most part, formed by the long and lateral heads. The medial head is deeply placed; but a very small portion of it appears superficially, above the elbow, on each side of the common tendon of insertion.

The long head of the triceps arises, by a flattened tendon, from the infraglenoid tubercle of the scapula.

The two humeral heads originate from the back of the humerus; and if it is borne in mind that no fibers arise from the spiral groove and that the groove intervenes between the origins of the two heads, their relations will be easily understood.

The lateral head of the triceps arises from a rough strip that descends from the back of the great tuberosity to the groove – and also from the fascial sheet that bridges across the groove for the protection of the radial nerve.

The triceps is supplied by branches from the radial nerve. It is a powerful extensor of the elbow joint and, by virtue of its long head, takes part also in the movements of the shoulder joint.