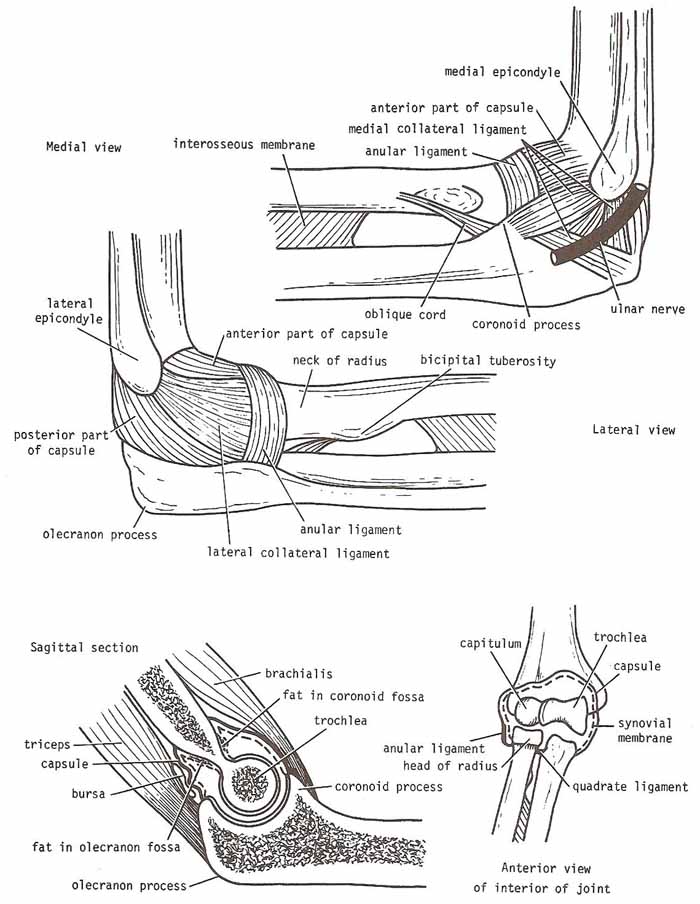 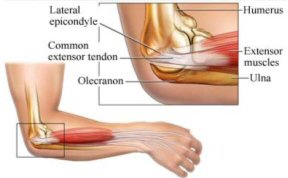 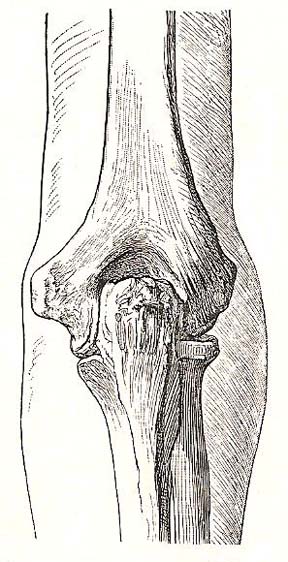 Relation of bones of the elbow to the surface. Dorsal view; elbow fully extended. 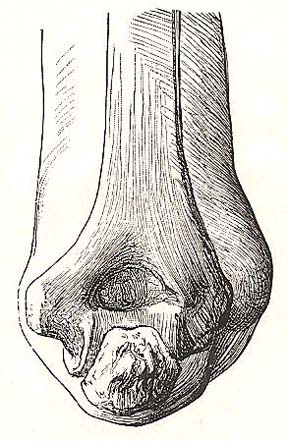 Relation of bones of the elbow to the surface. Dorsal view; elbow fully extended.

The elbow joint is very stable because of the wrench shape of the trochlear notch of the ulna, which fits around the pulley-shaped trochlea of the humerus. The joint is also strengthened by strong medial and lateral collateral ligaments.

The surface of the elbow joint is covered by hyaline cartilage that protects and cushions the joints. The large muscle in the back of the arm, the triceps, attaches to the point of the ulna (called the olecranon). When this muscle contracts, it straightens out the elbow. The biceps muscle in the front of the arm, when contracted, bends the elbow.


Capsule of the elbow joint


Ligaments of the elbow joint

The lateral ligament is triangular in shape and is attached by its apex to the lateral epicondyle of the humerus, and by its base to the upper margin of the annular ligament.


Movements of the elbow joint

The elbow joint is capable of flexion and extension. Flexion is limited by the anterior surfaces of the forearm and arm coming into contact. Extension is checked by the tension of the anterior ligament and the brachialis muscle. Flexion is performed by the brachialis, biceps brachii, brachioradialis, and pronator teres muscles. Extension is performed by the triceps and anconeus muscles.

The long axis of the extended forearm lies at an angle to the long axis of the arm. This angle, which opens laterally, is called the carrying angle and is about 170° in the male and 167° in the female. The angle disappears when the elbow is fully flexed.

Anteriorly: The brachialis, the tendon of the biceps, the median nerve, and the brachial artery.

Medially: The ulnar nerve passes behind the medial epicondyle and crosses the medial ligament of the joint.

Laterally: The common extensor tendon and the supinator.

Tennis elbow is pain and tenderness on the outside of the elbow and in the back of the forearm. Also called lateral epicondylitis, it is caused by inflammation of the tendon that attaches the muscles that straighten the fingers and wrist to the humerus (the upper-arm bone).