radius (of the arm)

Figure 1. The bones of the forearm (radius and ulna), upper arm (humerus), hand, and wrist. 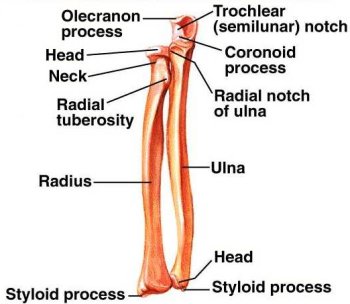 Figure 3. Ulna and radius. Illustration from from Gray's Anatomy


Fractures of the radius

Fractures of the radius are common and may affect the lower end, the upper end, or the shaft of the bone. Fracture of the radius just above the wrist is the most common of all fractures in people over 40. It is usually caused by falling on the palm of the hand, resulting in backward displacement of the wrist.

Fracture of the disk-shaped head of the radius, just below the elbow, is one of the most common fractures in young adults. Treatment depends on the type and severity of the fracture. A minor fracture may heal if placed in a soft, supportive bandage; others may require surgical correction. If the head of the bone is crushed or splintered, it may need to be removed. Fracture of the shaft of the radius may result in displacement of the broken ends of the bone. An operation may be required in order to reposition the bone ends and fix them together before the limb is immobilized. A fall or blow may sometimes cause dislocation of the radius from the elbow joint and with fracture of the ulna, a condition that is known as Monteggia's fracture. Fractures of the radius usually take about six weeks to heal.

The radius is situated on the lateral side of the ulna, which exceeds it in length and size. Its upper end is small, and forms only a small part of the elbow-joint; but its lower end is large, and forms the chief part of the wrist-joint. It is a long bone, prismatic in form and slightly curved longitudinally. It has a body and two extremities. (See diagram from Gray's Anatomy at the bottom of this page.)

The upper extremity presents a head, neck, and tuberosity. The head is of a cylindrical form, and on its upper surface is a shallow cup or fovea for articulation with the capitulum of the humerus. The circumference of the head is smooth; it is broad medially where it articulates with the radial notch of the ulna, narrow in the rest of its extent, which is embraced by the annular ligament. The head is supported on a round, smooth, and constricted portion called the neck, on the back of which is a slight ridge for the insertion of part of the Supinator. Beneath the neck, on the medial side, is an eminence, the radial tuberosity; its surface is divided into a posterior, rough portion, for the insertion of the tendon of the Biceps brachii, and an anterior, smooth portion, on which a bursa is interposed between the tendon and the bone.

The body or shaft (corpus radii)

The body is prismoid in form, narrower above than below, and slightly curved, so as to be convex lateralward. It presents three borders and three surfaces.

The volar border (margo volaris; anterior border) extends from the lower part of the tuberosity above to the anterior part of the base of the styloid process below, and separates the volar from the lateral surface. Its upper third is prominent, and from its oblique direction has received the name of the oblique line of the radius; it gives origin to the flexor digitorum sublimis and flexor pollicis longus; the surface above the line gives insertion to part of the Supinator. The middle third of the volar border is indistinct and rounded. The lower fourth is prominent, and gives insertion to the Pronator quadratus, and attachment to the dorsal carpal ligament; it ends in a small tubercle, into which the tendon of the Brachioradialis is inserted.

The dorsal border (margo dorsalis; posterior border) begins above at the back of the neck, and ends below at the posterior part of the base of the styloid process; it separates the posterior from the lateral surface. It is indistinct above and below, but well-marked in the middle third of the bone. The interosseous crest (crista interossea; internal or interosseous border) begins above, at the back part of the tuberosity, and its upper part is rounded and indistinct; it becomes sharp and prominent as it descends, and at its lower part divides into two ridges which are continued to the anterior and posterior margins of the ulnar notch. To the posterior of the two ridges the lower part of the interosseous membrane is attached, while the triangular surface between the ridges gives insertion to part of the Pronator quadratus. This crest separates the volar from the dorsal surface, and gives attachment to the interosseous membrane.

The volar surface (facies volaris; anterior surface) is concave in its upper three-fourths, and gives origin to the Flexor pollicis longus; it is broad and flat in its lower fourth, and affords insertion to the Pronator quadratus. A prominent ridge limits the insertion of the Pronator quadratus below, and between this and the inferior border is a triangular rough surface for the attachment of the volar radiocarpal ligament. At the junction of the upper and middle thirds of the volar surface is the nutrient foramen, which is directed obliquely upward.

The dorsal surface (facies dorsalis; posterior surface) is convex, and smooth in the upper third of its extent, and covered by the Supinator. Its middle third is broad, slightly concave, and gives origin to the Abductor pollicis longus above, and the extensor pollicis brevis below. Its lower third is broad, convex, and covered by the tendons of the muscles which subsequently run in the grooves on the lower end of the bone.

The lateral surface (facies lateralis; external surface) is convex throughout its entire extent. Its upper third gives insertion to the Supinator. About its center is a rough ridge, for the insertion of the Pronator teres. Its lower part is narrow, and covered by the tendons of the Abductor pollicis longus and Extensor pollicis brevis.

The lower extremity is large, of quadrilateral form, and provided with two articular surfaces – one below, for the carpus, and another at the medial side, for the ulna. The carpal articular surface is triangular, concave, smooth, and divided by a slight anteroposterior ridge into two parts. Of these, the lateral, triangular, articulates with the navicular bone; the medial, quadrilateral, with the lunate bone. The articular surface for the ulna is called the ulnar notch (sigmoid cavity) of the radius; it is narrow, concave, smooth, and articulates with the head of the ulna. These two articular surfaces are separated by a prominent ridge, to which the base of the triangular articular disk is attached; this disk separates the wrist-joint from the distal radioulnar articulation. This end of the bone has three non-articular surfaces – volar, dorsal, and lateral. The volar surface, rough and irregular, affords attachment to the volar radiocarpal ligament. The dorsal surface is convex, affords attachment to the dorsal radiocarpal ligament, and is marked by three grooves. Enumerated from the lateral side, the first groove is broad, but shallow, and subdivided into two by a slight ridge; the lateral of these two transmits the tendon of the Extensor carpi radialis longus, the medial the tendon of the Extensor carpi radialis brevis. The second is deep but narrow, and bounded laterally by a sharply defined ridge; it is directed obliquely from above downward and lateralward, and transmits the tendon of the Extensor pollicis longus. The third is broad, for the passage of the tendons of the Extensor indicis proprius and Extensor digitorum communis. The lateral surface is prolonged obliquely downward into a strong, conical projection, the styloid process, which gives attachment by its base to the tendon of the Brachioradialis, and by its apex to the radial collateral ligament of the wrist-joint. The lateral surface of this process is marked by a flat groove, for the tendons of the Abductor pollicis longus and Extensor pollicis brevis.

The long narrow medullary cavity is enclosed in a strong wall of compact tissue which is thickest along the interosseous border and thinnest at the extremities except over the cup-shaped articular surface (fovea) of the head where it is thickened. The trabeculae of the spongy tissue are somewhat arched at the upper end and pass upward from the compact layer of the shaft to the fovea capituli; they are crossed by others parallel to the surface of the fovea. The arrangement at the lower end is somewhat similar.

The radius is ossified from three centers: one for the body, and one for either extremity. That for the body makes its appearance near the center of the bone, during the eighth week of fetal life. About the end of the second year, ossification commences in the lower end; and at the fifth year, in the upper end. The upper epiphysis fuses with the body at the age of seventeen or eighteen years, the lower about the age of twenty. An additional center sometimes found in the radial tuberosity, appears about the fourteenth or fifteenth year.