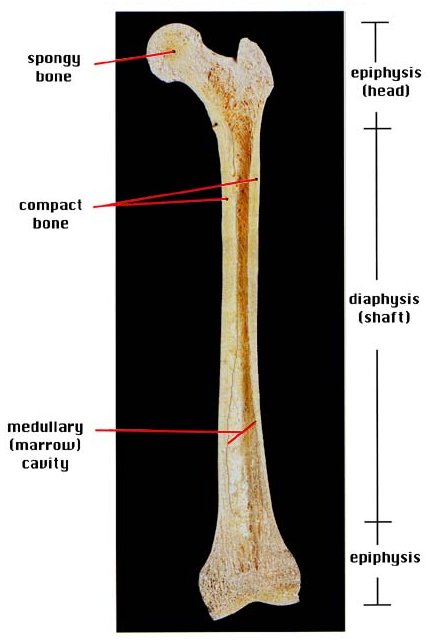 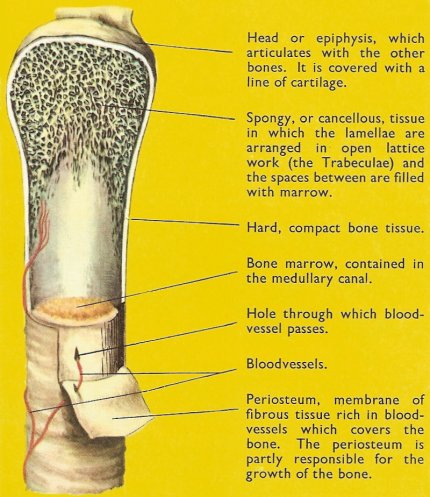 Sectional diagram of a long bone.

A long bone is a bone that is significantly longer than it is wide. Examples of long bones are the femur, tibia, and fibula of the leg, the humerus, radius, and ulna of the arm, and the phalanges of the fingers and toes. A long bone consists of a long shaft (diaphysis) with two bulky ends or extremities (epiphyses) where articulation takes place.

In the early stages of fetal development, the long bones are formed purely of cartilage. Bone tissue forms as special cells, called osteoblasts, lay down mineralized channels into the cartilage. The shafts, or diaphyses, are the first parts to start to ossify, followed later by the epiphyses. Between each diaphysis and epiphysis remains a thin plate of cartilage known as a metaphysis.

As the bone grows, the metaphysis constantly adds new cartilage, and the diaphysis continues to ossify into this cartilage. So the bone can grow even as parts of it have already become mineralized tissue. During the course of development, the bone tissue is recycled, gradually altering its shape. The hard cortical tissue can be invaded by cells that destroy the bone, called osteoclasts, only to have new bone laid down by secondary osteoblasts. The surface of the bone can be altered by having bone gradually removed, a process called resorption. Thus, bones remain living organs that can change their shape gradually, heal themselves, and adapt to new habits and needs.