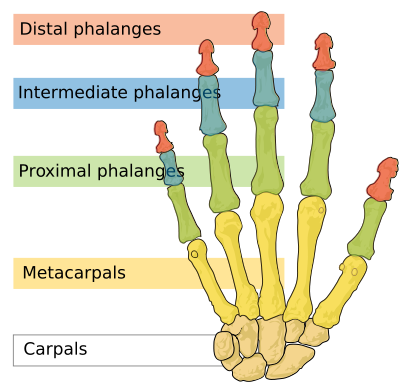 The phalanges and other bones of the hand.

A phalange is any of the bones in the fingers and toes. In humans, there are 14 phalanges in each hand and foot, 2 in each thumb and big toe, and 3 in the remaining digits. They are connected to the metacarpals in the hand and the metatarsals in the foot.

The phalanges of the hand (phalanges digitorum manus) are 14 in number, three for each finger, and two for the thumb. Each consists of a body and two extremities. The body tapers from above downward, is convex posteriorly, concave in front from above downward, flat from side to side; its sides are marked by rough areas which give attachment to the fibrous sheaths of the flexor tendons. The proximal extremities of the bones of the first row present oval, concave articular surfaces, broader from side to side than from before backward. The proximal extremity of each of the bones of the second and third rows presents a double concavity separated by a median ridge. The distal extremities are smaller than the proximal, and each ends in two condyles separated by a shallow groove; the articular surface extends farther on the volar than on the dorsal surface, a condition best marked in the bones of the first row.

The ungual phalanges are convex on their dorsal and flat on their volar surfaces; they are recognized by their small size, and by a roughened, elevated surface of a horseshoe form on the volar surface of the distal extremity of each which serves to support the sensitive pulp of the finger.


ossification of the bones of the hand

Occasionally an additional bone, the os centrale, is found on the back of the carpus, lying between the navicular, lesser multangular, and capitate. During the second month of fetal life it is represented by a small cartilaginous nodule, which usually fuses with the cartilaginous navicular. Sometimes the styloid process of the third metacarpal is detached and forms an additional ossicle.

The phalanges are each ossified from two centers: one for the body, and one for the proximal extremity. Ossification begins in the body, about the eighth week of fetal life. Ossification of the proximal extremity starts in the bones of the first row between the third and fourth years, and a year later in those of the second and third rows. The two centers become united in each row between the eighteenth and twentieth years.

The phalanges of the foot correspond, in number and general arrangement, with those of the hand; there are two in the great toe, and three in each of the other toes. They differ from them, however, in their size, the bodies being much reduced in length, and, especially in the first row, laterally compressed.

The body of each is compressed from side to side, convex above, concave below. The base is concave; and the head presents a trochlear surface for articulation with the second phalanx.

The phalanges of the second row are remarkably small and short, but rather broader than those of the first row. The ungual phalanges, in form, resemble those of the fingers; but they are smaller and are flattened from above downward; each presents a broad base for articulation with the corresponding bone of the second row, and an expanded distal extremity for the support of the nail and end of the toe.


ossification of the bones of the foot

The tarsal bones are each ossified from a single center, excepting the calcaneus, which has an epiphysis for its posterior extremity. The centers make their appearance in the following order: calcaneus at the sixth month of fetal life; talus, about the seventh month; cuboid, at the ninth month; third cuneiform, during the first year; first cuneiform, in the third year; second cuneiform and navicular, in the fourth year. The epiphysis for the posterior extremity of the calcaneus appears at the tenth year, and unites with the rest of the bone soon after puberty. The posterior process of the talus is sometimes ossified from a separate center, and may remain distinct from the main mass of the bone, when it is named the os trigonum.