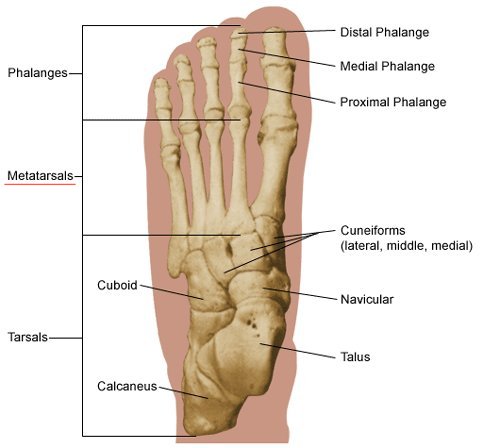 Fig 1. Anatomy of the foot. 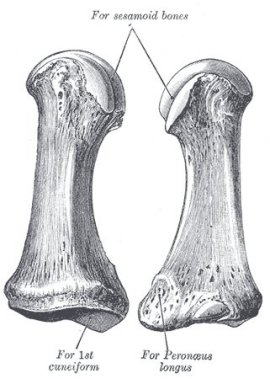 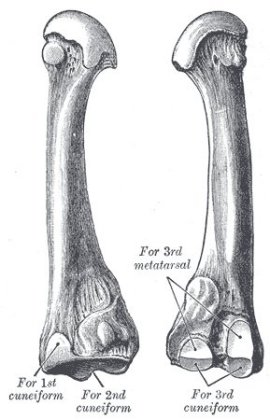 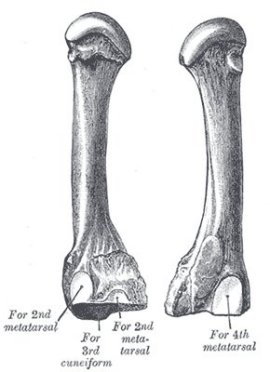 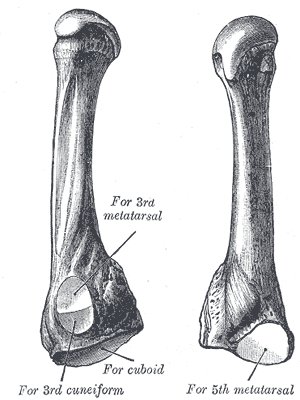 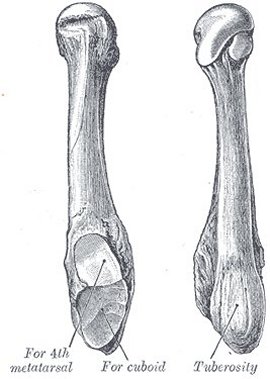 Metatarsal is any of the five long bones of the foot (hind feet in quadrupeds), which collectively make up the metatarsus. They are analogous to the metacarpals of the hand. The metatarsals articulate at one end with the tarsals (ankle bones) and at the other with the phalanges (toe bones).


Osteology of the metatarsals (Gray's Anatomy, 1918)

The metatarsals are numbered from the medial side (ossa metatarsalia I.-V.); each presents for examination a body and two extremities.


Common characteristics of the metatarsal bones

The body is prismoid in form, tapers gradually from the tarsal to the phalangeal extremity, and is curved longitudinally, so as to be concave below, slightly convex above. The base or posterior extremity is wedge-shaped, articulating proximally with the tarsal bones, and by its sides with the contiguous metatarsal bones: its dorsal and plantar surfaces are rough for the attachment of ligaments. The head or anterior extremity presents a convex articular surface, oblong from above downward, and extending farther backward below than above. Its sides are flattened, and on each is a depression, surmounted by a tubercle, for ligamentous attachment. Its plantar surface is grooved anteroposteriorly for the passage of the flexor tendons, and marked on either side by an articular eminence continuous with the terminal articular surface.


Characteristics of the individual metatarsal bones

The first metatarsal bone is remarkable for its great thickness, and is the shortest of the metatarsal bones. The body is strong, and of well-marked prismoid form. The base presents, as a rule, no articular facets on its sides, but occasionally on the lateral side there is an oval facet, by which it articulates with the second metatarsal. Its proximal articular surface is of large size and kidney-shaped; its circumference is grooved, for the tarsometatarsal ligaments, and medially gives insertion to part of the tendon of the Tibialis anterior; its plantar angle presents a rough oval prominence for the insertion of the tendon of the Peroneus longus. The head is large; on its plantar surface are two grooved facets, on which glide sesamoid bones; the facets are separated by a smooth elevation.

The second metatarsal bone is the longest of the metatarsal bones, being prolonged backward into the recess formed by the three cuneiform bones. Its base is broad above, narrow and rough below. It presents four articular surfaces: one behind, of a triangular form, for articulation with the second cuneiform; one at the upper part of its medial surface, for articulation with the first cuneiform; and two on its lateral surface, an upper and lower, separated by a rough non-articular interval. Each of these lateral articular surfaces is divided into two by a vertical ridge; the two anterior facets articulate with the third metatarsal; the two posterior (sometimes continuous) with the third cuneiform. A fifth facet is occasionally present for articulation with the first metatarsal; it is oval in shape, and is situated on the medial side of the body near the base.

The third metatarsal bone articulates proximally, by means of a triangular smooth surface, with the third cuneiform; medially, by two facets, with the second metatarsal; and laterally, by a single facet, with the fourth metatarsal. This last facet is situated at the dorsal angle of the base.

The fifth metatarsal bone is recognized by a rough eminence, the tuberosity, on the lateral side of its base. The base articulates behind, by a triangular surface cut obliquely in a transverse direction, with the cuboid; and medially, with the fourth metatarsal. On the medial part of its dorsal surface is inserted the tendon of the Peroneus tertius and on the dorsal surface of the tuberosity that of the Peroneus brevis. A strong band of the plantar aponeurosis connects the projecting part of the tuberosity with the lateral process of the tuberosity of the calcaneus. The plantar surface of the base is grooved for the tendon of the Abductor digiti quinti, and gives origin to the Flexor digiti quinti brevis.