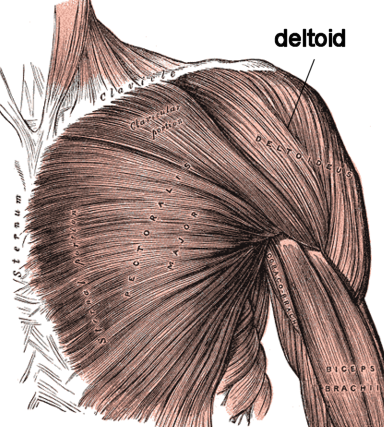 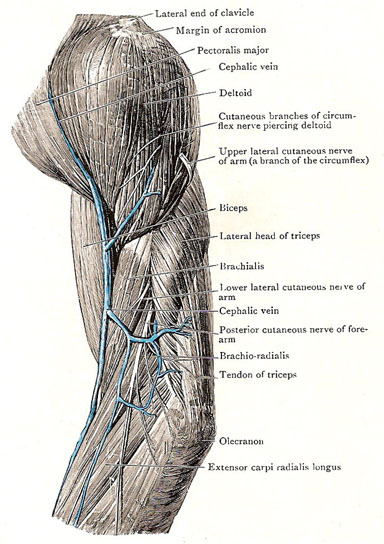 The deltoid is a thick triangular muscle of the shoulder region that forms the rounded flesh of the outer part of the upper arm, and passes up and over the shoulder joint. The wide end of the deltoid is attached to the scapula (shoulder blade) and the clavicle (collarbone). The muscle fibers converge to form the apex of the triangle, which is attached to the humerus (upper-arm bone) about halfway down its length.


Anatomical details of the deltoid muscle

The deltoid muscle is composed of short, coarse fasciculi, separated by tendinous intersections; and, as its name implies, is triangular outline. It arises, by its upper end or base: (1) from the lateral third of the clavicle; (2) from the acromion; and (3) from the crest of the spine of the scapula. Its origin corresponds closely with the intersection of the trapezius. Its bundles of fasciculi converge rapidly as they pass to a pointed, tendinous insertion into the deltoid tuberosity of the humerus. The muscle is supplied by the branches of the circumflex nerve which enter its deep surface.

The form of the deltoid and the manner in which it clasps the shoulder determine its actions. Its anterior and posterior portions are opposed to each other; the anterior fibers act with the pectoralis major (clavicular head) in flexing the arm at the shoulder joint, and in medial rotation; the posterior fibers, acting with other muscles, reverse these movements. The acromial part of the deltoid is the chief agent in abduction at the shoulder joint, a stage in the action of raising the arm above the head.

The deltoid covers the upper part of the humerus, and envelops the region of the shoulder joint behind, laterally and in front; and its anterior border covers the coracoid process and the muscles and ligaments attached to it. It is separated from the shoulder joint by the muscles attached to the upper end of the humerus and by the subacromial bursa; and it covers also the long head of the biceps in the bicipital groove and the greater part of the circumflex nerve and vessels.

The full, rounded appearance of the shoulder is due to the deltoid passing over the upper end of the humerus and those muscles. When the head of the humerus is dislocated, the muscle passes vertically from its origin to its insertion, and the dislocation is recognized by the squareness or flatness of the shoulder.