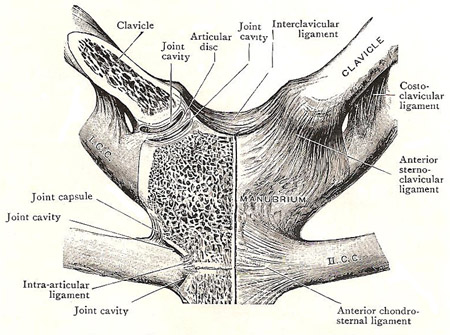 The sternoclavicular joint is a synovial joint (specifically, a plane joint) at which the medial end of the clavicle fits into the shallow socket provided by the clavicular notch of the manubrium sterni and the upper surface of the first costal cartilage. It is the only point of articulation of the upper limb with the axial skeleton and it determines the range of its movements. The joint is enclosed in a capsule attached to the cartilage and the bones just beyond the margins of the articular surfaces. The anterior and posterior parts of the capsule ligament are very strong and are called the anterior and posterior sternoclavicular ligaments. Associated with the joint there are an articular disk and two accessory ligaments – the interclavicular and the costclavicular.

The articular disk is a nearly circular plate of fibrocartilage situated in the interior of the joint, which it divides into two separate synovial cavities. It is continuous with anterior and posterior ligaments, but its main attachments are to the upper part of the medial end of the clavicle, and to the sternum and first costal cartilage at their junction; it therefore acts as a ligament which prevents upward displacement of the sternal end of the clavicle.

The interclavicular ligament is fused with the upper part of the capsular ligament. It passes between the medial ends of the two clavicles, but dips down to be attached also to the upper border of the manubrium.

The costoclavicular ligament is a strong, thick, flattened band that lies behind the subclavius muscle. It is attached to the first ribs and its cartilage at their junction, and extends upward and laterally to a rough impression on the lower surface of the clavicle near its medial end.

Behind the joint are two ribbon-like muscles of the neck – the sternohyoid and the sternothyroid. They separate the right joint from a large artery called the innominate artery, and the left joint from the left innominate vein.