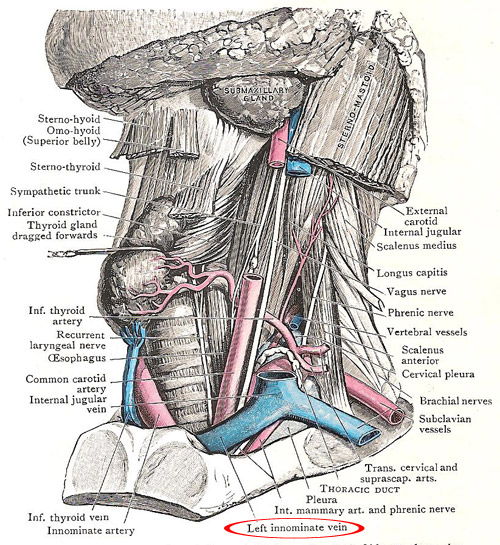 The root of the neck on the left side, showing vessels (including the left innominate vein), nerves, and muscles.

The innominate veins are the wide vessels that collect blood from the head and neck and the upper limbs. There are two innominate veins: a right and a left. Each of them begins behind the clavicle, near its medial end, by the union of the internal jugular vein and the subclavian vein; and they end behind the lower border of the first right costal cartilage by uniting with each other to form the superior vena cava.


Course and relations of the innominate veins

The right innominate vein is short and its course is almost vertical. It passes downwards and slightly medially to enter the thorax behind the first costal cartilage. It lies on the cervical pleura, with the phrenic nerve and the internal mammary artery between it and the pleura. It is behind the sternothyroid and sternohyoid muscles, and further forward, the clavicle and the costclavicular ligament. The innominate artery is medial to it; and the vagus lies in the fat behind the interval between these large vessels.

The left innominate vein is much longer because it has to cross behind the upper part of the manubrium to meet the right vein. In the neck, it lies first behind the clavicle in front of the pleura and the internal mammary artery, and, next, behind the sternoclavicular joint (from which it is separated by the sternothyroid and sternohyoid muscles) and in front of the phrenic and vagus nerves, the ascending part of the subclavian artery and the left common carotid and innominate arteries.


Tributaries of the innominate veins