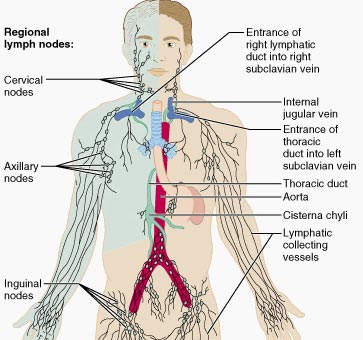 Major lymph nodes and vessels of the human body.

The thoracic duct is the largest lymphatic vessel in the human body, being about 41 centimeters (16 inches) long and 0.6 cm (0.25 in) wide. The thoracic duct carries the mixture of lymph and chyme from the cisterna chyli upward through the thorax to the left subclavian vein in the root of the neck.

Changes in pressure in the body, associated with breathing and muscular movements, cause the lymph to move up the thoracic duct, which is provided with several valves to prevent the fluid from flowing back down.

Just before the thoracic duct enters the subclavian vein it is joined by the left jugular and subclavian trunks carrying lymph from the left side of the head and neck and the left arm.


Further anatomy of the thoracic duct

Although small, the thoracic duct is very important because it conveys most of the lymph to the bloodstream – including the lymph from the intestines. The intestinal lymph is called chyle, and its special importance is that it contains most of the fat absorbed from food; it is owing to the fat that the contents of the thoracic duct are milky in appearance after a meal.

The thoracic duct arises in the abdomen from an elongated sac – the cisterna chyli – which lies in front of the first and second lumbar vertebrae under cover of the right crus of the diaphragm. It enters the thorax through the aortic opening of the diaphragm, on the right side of the aorta; and it continues upward through the posterior mediastinum, lying between the descending aorta and azygos vein, at first behind the diaphragm and then behind the esophagus. At the level of the fifth thoracic vertebra it crosses to the left of the median plane; it then ascends, through the superior mediastinum, along the left border of the esophagus, in contact, on the left, first with the aortic arch and then with the left pleura. At the inlet of the thorax the thoracic duct enters the root of the neck, where it arches laterally behind the left carotid sheath, and then downward in front of the subclavian artery to terminate in the upper end of the left innominate vein, in the angle of junction of the internal jugular and subclavian veins.

The duct may divide and reunite in its course throughout the thorax, and in the superior mediastinum it frequently communicates with the right mediastinal lymph trunk. Its interior contains numerous valves; the terminal valve is usually situated a short distance from the end of the duct.

Immediately before its termination it usually receives the united left jugular and subclavian lymph trunks (which carry lymph from the left side of the head and neck and from the upper limb, respectively), unless they end separately in one or other of the three large veins. It may also, though rarely, receive the left mediastinal lymph trunk. This trunk collects lymph from the deeper parts of the anterior thoracic wall and of the upper part of the anterior abdominal wall and from the anterior part of the diaphragm on the left side, from the left half of the mediastinum, the left side of the heart, and the left lung; and, as a rule, it enters separately into the commencement of the left innominate vein.