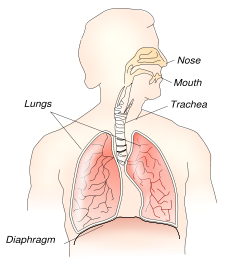 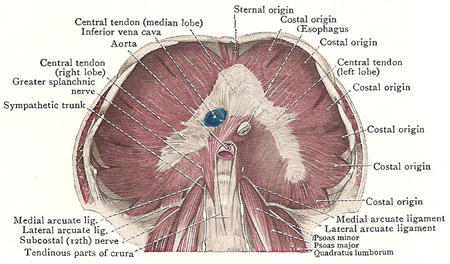 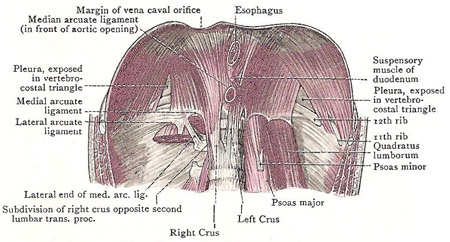 The diaphragm is a thin dome-shaped skeletal muscle that separates the thoracic and abdominal cavities. The diaphragm plays an important role in breathing: it contracts with each inspiration, becoming flattened downward and increasing the volume of the thoracic cavity so that air is drawn into the respiratory tract, and then, with expiration, it relaxes and is restored to its dome shape. After the heart, it is the second most important muscle in the body.

The diaphragm has a right and left muscular dome rising high into the thorax and separating the lungs from the abdominal viscera; and an intermediate flat central tendon, on which rests the heart. The muscular portion has a number of bony origins. In front, it arises from the back of the xiphisternum; at the sides, from the lower ribs; and in the midline posteriorly it helps form the upper part of the posterior abdominal wall by arising in two pillars or crura from the sides of the upper lumbar vertebrae.


Role of the diaphragm in breathing

There are two types of breathing – thoracic and abdominal. The diaphragm is involved with the latter. With every breath, the diaphragm descends and rises again, and in this way the capacity of the thorax is alternately increased and decreased in its vertical diameters. The vault of the diaphragm is higher on the right side than on the left, and in ordinary expiration it is only a little below the nipple on each side; but in forced expiration the left cupola rises to the level of the nipple and the right reaches the level of the rib above the nipple – the fourth.

The central part of the diaphragm is aponeurotic (see aponeurosis) and exceptionally strong. The tendinous bundles of this central tendon run in different directions, and, interlacing with one another, give it a pleated appearance. In outline, it is uneven and sharply-curved semilune indistinctly divided into three lobes with the concavity directed backward. The middle part or median lobe is the widest; the horns are the right and left lobes, of which the left is the narrower.

The diaphragm takes origin at its circumference from the margins of the outlet of the thorax; and, from the origin, the fleshy bundles curve upward and inward from every side to be inserted into the edges of the central tendon.


Divisions of the fleshy part of the diaphragm

The fleshy part of the diaphragm is divided into three parts – sternal, costal, and vertebral.

The sternal part is very short and narrow, and is merely a pair of small slips that spring from the back of the xiphoid process; the right is separated from the left by a little areolar tissue.

The costal part is very extensive, but it rises so steeply at first that, in a drawing of the diaphragm from above or below, its lower part is greatly foreshortened. On each side, it arises from the inner surfaces of the lower six costal cartilages, along a zigzag line, by six wide, oblique slips – the corresponding slips of the transversus abdominis fitting into the shallow angles of the line.

The vertebral part takes origin from the upper lumbar vertebrae by means of a pair of crura, and also, on each side, from two arcuate ligaments that are connected with these vertebrae.

Each crus is a thick, fleshy bundle that tapers inferiorly into a tendinous funnel out of which fleshy fibers proceed; and its attachment to the vertebral bodies is interrupted by the passage of upper lumbar arteries between the crus and the bone. The left crus is attached to the anterior surface of the upper two lumbar vertebrae and the intervening disk. The right crus is thicker and longer, and is attached to the upper three vertebrae and the intervening disks. The fleshy fibers of the crura spread out and ascent to reach the central tendon – the fibers of the right crus encircling the esophagus on the way up.

Opposite the last thoracic vertebra, the two crura are united to each other by a tendinous band called the median arcuate ligament, from which a few fibers of the diaphragm arise. This band arches across the aorta as it enters the abdomen, and exemplifies the rule that where an artery passes through the bony attachment of a muscle it is protected by a tendinous arch.

The medial and lateral arcuate ligaments are tendinous bands that extend the vertebral attachment of the diaphragm across the upper parts of the psoas major and quadratus lumborum. They are tendinous parts of the diaphragm, but they are fused with the fascia that covers the psoas and quadratus as these muscles pass behind the diaphragm. medial arcuate ligament is highly arched; it springs from the tendinous part of the crus, curves across the front of the psoas, and then dips backward across its lateral side to be attached to the tip of the first or the second lumbar transverse process. The lateral arcuate ligament stretches across the quadratus lumborum from the tip of that process to the last rib. The portion of the diaphragm that arises from the lateral ligament is very thin, and is overlapped by the costal part near the central tendon; it varies in width – its origin frequently failing to extend as far as the costal end of the ligament.


Foramina in the diaphragm

The continuity of the diaphragm is broken by three large apertures and several smaller ones. The three main openings are the aortic, the esophagal, and the vena canal.

The aortic opening is in the median plane in front of the lower border of the twelfth thoracic vertebra, between the crura, and behind the median arcuate ligament. It transmits the aorta, the azygos vein on the right side of the aorta, the thoracic duct, between those two, and a pair of lymph vessels that descend from the thorax to the cisterna chyli – which is the receptacle for lymph from which the thoracic duct arises.

The esophagal opening is an oval aperture place obliquely behind the central tendon, surrounded by fleshy bundles which constrict it and prevent regurgitation of food when the contracting diaphragm descends and exerts pressure on the abdominal contents. The opening transmits the esophagus, the gastric nerves, and the esophagal branches of the left gastric vessels. It is about one inch to the left of the median plane opposite the seventh costal cartilage, at the level of the body of the tenth thoracic vertebra – i.e., at the level of the ninth spine. But its position is variable: it may be in the median plane or even to the right of it; and it may be fairly close to the aortic opening.

The vena canal opening is a wide opening about one inch to the right of the median plane opposite the sixth costal cartilage at the level of the body of an eighth thoracic vertebra and of the seventh spine (but may be lower). It is in the central tendon between the right and median lobes – which ensures that is stretched when the diaphragm contracts, thus facilitating the flow of venous blood into the thorax that takes place with every inspiration. It transmits the inferior vena cava, slender branches of the right phrenic nerve, and a few lymph vessels from the liver.

Numerous smaller structures pass between the thorax and the abdomen – some of them through the diaphragm and some behind it.

A hiatus hernia can result when the upper part of the stomach protrudes into the thorax through a tear or weakness in the diaphragm.

If the diaphragm is struck, or otherwise spasms, breathing becomes difficult. This is what is meant by "having the wind knocked out of you."

Hiccups are due to periodic, involuntary contractions of the diaphragm.