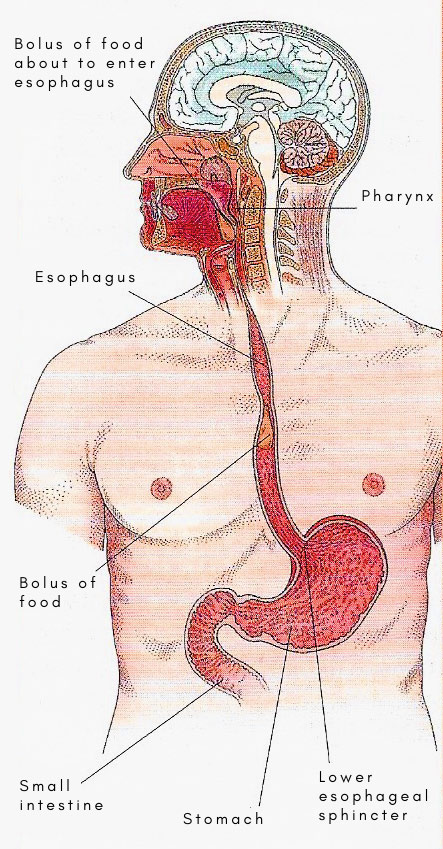 The esophagus is a collapsible muscular tube, about 25 cm (10 inches) long, that serves as a passageway between the pharynx and the stomach. It forms part of the gastrointestinal tract. Food passes down the esophagus by gravity and peristalsis.


Further anatomy of the esophagus

the esophagus begins in the neck, where it is continuous with the lower part of the pharynx. It descends through the lower part of the neck behind the trachea, and enters the thorax at the inlet; it then descends through the superior and posterior mediastina, and leaves the thorax, opposite the seventh left cartilage about an inch from the median plane, at the level of the ninth thoracic spine, by passing through esophageal orifice of the diaphragm in the abdomen, where it joins the stomach almost at once. As it enters the thorax it is slightly to the left of the median plane, and trends more to the left as it descends, till, about the level of the seventh thoracic vertebra, it begins to pass from the medial side of the descending aorta on to the front of it; and, since the aorta, as it descends, inclines from the the left side of the vertebral bodies toward the median plane, the esophagus is even more to the left than the aorta before it pierces the diaphragm. Note that the esophagus is closely related to the aorta – first on its right side, and then in front of it.

In the superior mediastinum, the esophagus is in relation with the thoracic duct, the left subclavian artery, the left pleura and lung, and the arch of the aorta. From the fifth to the seventh thoracic vertebrae, its left lateral relation is the descending aorta; and its lower part, which lies in front of the descending aorta, is in relation with the left pleura and lung.


Functions of the esophagus

Disorders and diseases of the esophagus include reflux esophagitis or heartburn, ulcer, stricture, and cancer.