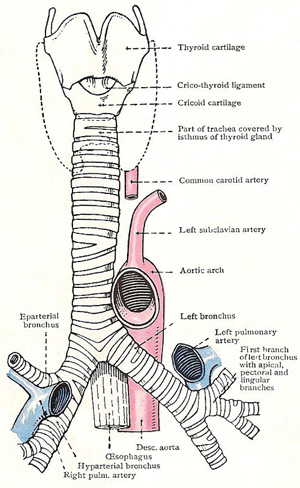 Larynx, trachea, and bronchi. The dotted line gives the outline of the thyroid gland.

A bronchus is a large air-tube of the human (and, more generally, of the tetrapod) lung. Each lung has one large bronchus, connecting it to the trachea. Within the lung the bronchus branches successively into five lobar bronchi, 20 segmental bronchi, two or three more divisions, and finally into bronchioles. A bronchus has cartilage plates, smooth muscle, and mucus-secreting gland-cells in its wall. It also has lining cells with cilia beating towards the mouth, which remove dust and other small debris.


Further anatomy of the bronchi

Each bronchus passes downward and sideward, first to the hilum of the corresponding lung, and then downward in the substance of the lung toward its base. It can be divided, therefore, into an extrapulmonary and an intrapulmonary section. The extrapulmonary part is kept permanently open by curved cartilaginous bars which are like those in the trachea, and it is therefore flattened posteriorly. The intrapulmonary parts of the bronchi are kept open by cartilaginous plates, which are irregularly distributed in the substance of their walls.


Relations of the extrapulmonary bronchi

The right bronchus is about 2.5 cm (1 in) long; it is more vertical than the left and slightly wider; foreign bodies which have entered the windpipe pass, therefore, more frequently into it than into the left bronchus. Anterior to it are the right pulmonary artery, the pericardium, the lower part of the superior vena cava, and the ascending aorta. The arch of the azygos vein is above it; and behind it are the bronchial vessels and the posterior pulmonary plexus.

The right bronchus gives off one branch, which arises close to the hilum and is called the epartreial bronchus because it originates immediately above the point where the right pulmonary artery crosses in front of the stem-bronchus.

Anterior to the left bronchus are the left pulmonary artery and the pericardium, which separates the bronchus from the left atrium. The arch of the aorta is above it; and behind it are the esophagus, and the descending aorta as well as bronchial vessels and posterior pulmonary plexus.

A bronchiole is a small (less than 1 mm diameter) air-conducting tube of the lung. Bronchioles arise as branches of a bronchus and terminate in alveoli. The walls of bronchioles are abundant in smooth muscle, which controls the size of the lumen. The cartilage and mucus glands found in bronchi are absent.