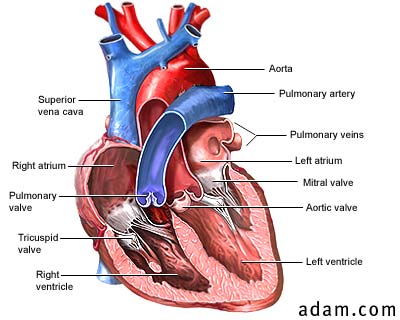 The pulmonary trunk (pulmonary artery or main pulmonary artery) is approximately 5 centimeters (2 inches) in length and 3 cm (1.2 in) in diameter. It branches into two pulmonary arteries (left and right), which deliver deoxygenated blood to the corresponding lung.

The right pulmonary artery commences below the arch of the aorta, and runs to the right and slightly downward to reach the hilum of the right lung. In its course, it passes behind the ascending aorta and the superior vena cava, and in front of the esophagus and the stem of the right bronchus. Near the lung it gives off a large branch which accompanies the eparterial bronchus.

The left pulmonary artery runs to the left and backward, across the front of the descending aorta and the left bronchus, to the hilum of the left lung.