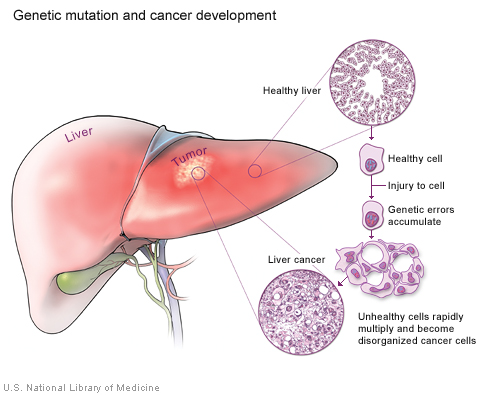 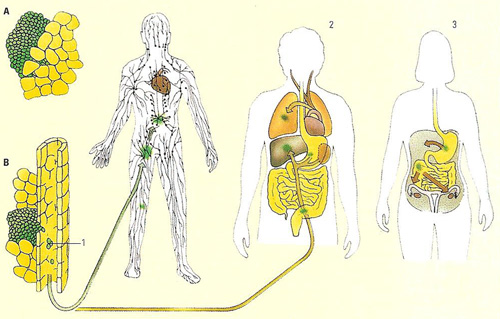 HOW CANCER SPREADS. This can happen in two ways. First, by direct growth into adjacent tissues, called direct extension (A), when cancer cells penetrate into bone, soft connective tissue, and the walls of veins and lymphatic vessels. Alternatively, a cancer cell separates from its tumor and is transported to another part of the body. This spread of cancer is called metastasis (B). In metastasis, after the tumor has grown to some size, cancer cells or small groups of cells enter a blood or lymph vessel (1). They travel through the vessel until they are stopped by a barrier, such as a lymph node, where additional tumors may develop, before releasing more cells, which may develop on other lymph nodes. Some cancers, such as carcinomas, may also invade the blood stream and establish more distant secondary growths. Another type of cancer, sarcomas, tend to spread via venous blood vessels frequently establishing tumors in the lungs, the gastrointestinal tract, or the genito-urinary tract (2). In abdominal cancers, metastases may also arise as a result of travel across body cavities, such as the peritoneal, oral, or pleural cavities (3).

Cancer is a disease in which abnormal cells divide and grow unchecked. It can spread from its original site to other parts of the body and can also be fatal if not treated adequately.

Cancer begins in cells, the building blocks that make up tissues. Tissues make up the organs of the body.

Normally, cells grow and divide to form new cells as the body needs them. When cells grow old, they die, and new cells take their place.

Sometimes, this orderly process goes wrong. New cells form when the body does not need them, and old cells do not die when they should. These extra cells can form a mass of tissue called a growth or tumor. Tumors can be benign or malignant.

Benign tumors are not cancerous:

Scientists have learned that cancer is caused by changes in genes that normally control the growth and death of cells. Certain lifestyle and environmental factors can change some normal genes into genes that allow the growth of cancer. Many gene changes that lead to cancer are the result of tobacco use, diet, exposure to ultraviolet radiation from the Sun, or exposure to carcinogens (cancer-causing substances) in the workplace or in the environment. Some gene alterations are inherited (from one or both parents). However, having an inherited gene alteration does not always mean that the person will develop cancer; it only means that the chance of getting cancer is increased. Scientists continue to examine the factors that may increase or decrease a person's chance of developing cancer.

Although being infected with certain viruses, such as the human papillomavirus (HPV), hepatitis B and C (HepB and HepC), and human immunodeficiency virus (HIV), increases the risk of some types of cancer, cancer itself is not contagious. A person cannot catch cancer from someone who has this disease. Scientists also know that an injury or bruise does not cause cancer.

Although there is no guaranteed way to prevent cancer, people can reduce their risk (chance) of developing cancer by:

Although many risk factors can be avoided, some, such as inherited conditions, are unavoidable. Still, it is helpful to be aware of them. It is also important to keep in mind that not everyone with a particular risk factor for cancer actually gets the disease; in fact, most do not. People who have an increased likelihood of developing cancer can help protect themselves by avoiding risk factors whenever possible and by getting regular checkups so that, if cancer develops, it is likely to be found and treated early. Treatment is often more effective when cancer is detected early. Screening exams, such as sigmoidoscopy or the fecal occult blood test, mammography, and the Pap test, can detect precancerous conditions (which can be treated before they turn into cancer) and early-stage cancer.

Cancer can cause a variety of symptoms. Possible signs of cancer include the following:

If symptoms occur, the doctor may perform a physical examination, order blood work and other tests, and/or recommend a biopsy. In most cases, a biopsy is the only way to know for certain whether cancer is present. During a biopsy, the doctor removes a sample of tissue from the abnormal area. A pathologist studies the tissue under a microscope to identify cancer cells.

Cancer treatment can include surgery, radiation therapy, chemotherapy, hormone therapy, and biological therapy. The doctor may use one method or a combination of methods, depending on the type and location of the cancer, whether the disease has spread, the patient's age and general health, and other factors. Because treatment for cancer can also damage healthy cells and tissues, it often causes side effects. Some patients may worry that the side effects of treatment are worse than the disease. However, patients and doctors generally discuss the treatment options, weighing the likely benefits of killing cancer cells and the risks of possible side effects. Doctors can suggest ways to reduce or eliminate problems that may occur during and after treatment.

Surgery is an operation to remove cancer. The side effects of surgery depend on many factors, including the size and location of the tumor, the type of operation, and the patient's general health. Patients have some pain after surgery, but this pain can be controlled with medicine. It is also common for patients to feel tired or weak for a while after surgery.

Patients may worry that having a biopsy or other type of surgery for cancer will spread the disease. This is a very rare occurrence because surgeons take special precautions to prevent cancer from spreading during surgery. Also, exposing cancer to air during surgery does not cause the disease to spread.

Radiation therapy (also called radiotherapy) uses high-energy rays to kill cancer cells in a targeted area. Radiation can be given externally by a machine that aims radiation at the tumor area. It can also be given internally; needles, seeds, wires, or catheters containing a radioactive substance are placed directly in or near the tumor. Radiation treatments are painless. The side effects are usually temporary, and most can be treated or controlled. Patients are likely to feel very tired, especially in the later weeks of treatment. Radiation therapy may also cause a decrease in the number of white blood cells, which help protect the body against infection. With external radiation, it is also common to have temporary hair loss in the treated area and for the skin to become red, dry, tender, and itchy.

Chemotherapy is the use of drugs that kill cancer cells throughout the body. Healthy cells can also be harmed, especially those that divide quickly. The doctor may use one drug or a combination of drugs. The side effects of chemotherapy depend mainly on the drug(s) and the dose(s) the patient receives. Hair loss is a common side effect of chemotherapy; however, not all anticancer drugs cause loss of hair. Anticancer drugs may also cause temporary fatigue, poor appetite, nausea and vomiting, diarrhea, and mouth and lip sores. Drugs that prevent or reduce nausea and vomiting can help with some of these side effects. Normal cells usually recover when chemotherapy is over, so most side effects gradually go away after treatment ends.

Hormone therapy is used to treat certain cancers that depend on hormones for their growth. It works by keeping cancer cells from getting or using the hormones they need to grow. This treatment may include the use of drugs that stop the production of certain hormones or that change the way hormones work. Another type of hormone therapy is surgery to remove organs that make hormones. For example, the ovaries may be removed to treat breast cancer, or the testicles may be removed to treat prostate cancer.

Hormone therapy can cause a number of side effects. Patients may feel tired, or have fluid retention, weight gain, hot flashes, nausea and vomiting, changes in appetite, and, in some cases, blood clots. Hormone therapy may also cause bone loss in premenopausal women. Depending on the type of hormone therapy used, these side effects may be temporary, long lasting, or permanent.

Biological therapy uses the body's immune system, directly or indirectly, to fight disease and to lessen some of the side effects of cancer treatment. Monoclonal antibodies, interferon, interleukin-2, and colony-stimulating factors are some types of biological therapy.

The side effects caused by biological therapy vary with the specific treatment. In general, these treatments tend to cause flu-like symptoms, such as chills, fever, muscle aches, weakness, loss of appetite, nausea, vomiting, and diarrhea. Patients also may bleed or bruise easily, get a skin rash, or have swelling. These problems can be severe, but they go away after the treatment stops.

For more on specific types of cancer, see: