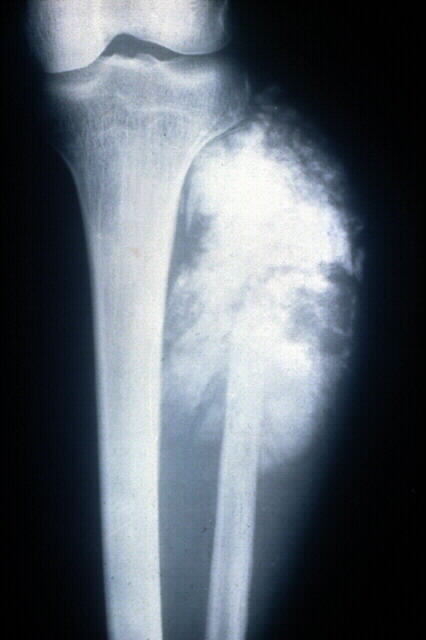 Bone cancer is a malignant tumor of the bone. It may originate in the bone itself, in which case it is called primary bone cancer. More commonly, however, it occurs as a result of cancer spreading from elsewhere in the body. Cancer that spreads, or metastasizes, to the bones from other parts of the body, such as the breast, lung, or prostate, is called secondary bone cancer or metastatic cancer, and is named for the organ or tissue in which it began. Secondary bone cancer is far more common than primary bone cancer. The cancerous growth replaces bone, causing pain and sometimes swelling. It also makes the bone more likely to fracture without preceding injury.

All forms of primary bone cancer are rare. The type that occurs most often is osteosarcoma, which most frequently affects the leg bones of children and young adults. Symptoms of osteosarcoma are pain, tenderness, and swelling, typically just above or just below the knee or in the upper arm.

Other types of primary bone cancer include chondrosarcoma (originating from cartilage) and fibrosarcoma (from fibrous tissue). Bone cancer can also start in the bone marrow, as in the case of and multiple myeloma. Ewing's sarcoma usually occurs in bone but may also arise in soft tissue (muscle, fat, fibrous tissue, blood vessels, or other supporting tissue).

Secondary, or metastatic, bone cancer usually occurs later in life. The cancers that spread rapidly to bone are those of the breast, lung, prostate, thyroid, and kidney. Bone metastases occur commonly in the spine, pelvis, ribs, and skull.

In secondary bone cancer, pain is usually the main symptom and is often worse at night. Affected bone are abnormally fragile and may fracture, even without preceding injury. Such a fracture (a pathological fracture) may be the first indication that a person has cancer.

Although bone cancer does not have a clearly defined cause, researchers have identified several factors that increase the likelihood of developing these tumors. Osteosarcoma occurs more frequently in people who have had high-dose external radiation therapy or treatment with certain anticancer drugs; children seem to be particularly susceptible. A small number of bone cancers are due to heredity. For example, children who have had hereditary retinoblastoma (an uncommon cancer of the eye) are at a higher risk of developing osteosarcoma, particularly if they are treated with radiation. Additionally, people who have hereditary defects of bones and people with metal implants, which doctors sometimes use to repair fractures, are more likely to develop osteosarcoma Ewing sarcoma is not strongly associated with any heredity cancer syndromes, congenital childhood diseases, or previous radiation exposure.

Pain is the most common symptom of bone cancer, but not all bone cancers cause pain. Persistent or unusual pain or swelling in or near a bone can be caused by cancer or by other conditions. It is important to see a doctor to determine the cause.

To help diagnose bone cancer, the doctor asks about the patient's personal and family medical history. The doctor also performs a physical examination and may order laboratory and other diagnostic tests. These tests may include:

Treatment options depend on the type, size, location, and stage of the cancer, as well as the person's age and general health. Treatment options for bone cancer include surgery, chemotherapy, radiation therapy, and cryosurgery.


Bone cancer sometimes metastasizes, particularly to the lungs, or can recur, either at the same location or in other bones in the body. People who have had bone cancer should see their doctor regularly and should report any unusual symptoms right away. Follow-up varies for different types and stages of bone cancer. Generally, patients are checked frequently by their doctor and have regular blood tests and X-rays. People who have had bone cancer, particularly children and adolescents, have an increased likelihood of developing another type of cancer, such as leukemia, later in life. Regular follow-up care ensures that changes in health are discussed and that problems are treated as soon as possible.