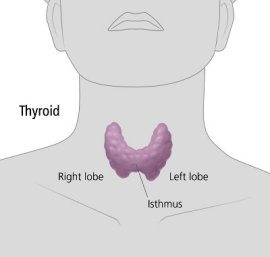 Thyroid cancer is cancer that forms in the thyroid gland (an organ at the base of the throat that makes hormones that help control heart rate, blood pressure, body temperature, and weight). The four main types of thyroid cancer are papillary, follicular, medullary, and anaplastic thyroid cancer. These four types are based on how the cancer cells look under a microscope.

The thyroid is a gland in the neck. It has two kinds of cells that make hormones. Follicular cells make thyroid hormone, which affects heart rate, body temperature, and energy level. C cells make calcitonin, a hormone that helps control the level of calcium in the blood.

The thyroid is shaped like a butterfly and lies at the front of the neck, beneath the larynx (voice box). It has two parts, or lobes. The two lobes are separated by a thin section called the isthmus.

A healthy thyroid is a little larger than a US quarter. It usually cannot be felt through the skin. A swollen lobe might look or feel like a lump in the front of the neck. A swollen thyroid is called a goiter. Most goiters are caused by not enough iodine in the diet. Iodine is a substance found in shellfish and iodized salt.

No one knows the exact causes of thyroid cancer. Doctors can seldom explain why one person gets this disease and another does not. However, it is clear that thyroid cancer is not contagious. No one can "catch" cancer from another person.

Research has shown that people with certain risk factors are more likely than others to develop thyroid cancer. A risk factor is anything that increases a person's chance of developing a disease.

The following risk factors are associated with an increased chance of developing thyroid cancer:


Most people who have known risk factors do not get thyroid cancer. On the other hand, many who do get the disease have none of these risk factors. People who think they may be at risk for thyroid cancer should discuss this concern with their doctor. The doctor may suggest ways to reduce the risk and can plan an appropriate schedule for checkups.

Early thyroid cancer often does not cause symptoms. But as the cancer grows, symptoms may include:

These symptoms are not sure signs of thyroid cancer. An infection, a benign goiter, or another problem also could cause these symptoms. Anyone with these symptoms should see a doctor as soon as possible. Only a doctor can diagnose and treat the problem.

If a person has symptoms that suggest thyroid cancer, the doctor may perform a physical exam and ask about the patient's personal and family medical history. The doctor also may order laboratory tests and imaging tests to produce pictures of the thyroid and other areas.

The exams and tests may include the following:

If the diagnosis is thyroid cancer, the doctor needs to know the stage, or extent, of the disease to plan the best treatment. Staging is a careful attempt to learn whether the cancer has spread and, if so, to what parts of the body.

The doctor may use ultrasonography, magnetic resonance imaging (MRI), or computed tomography (CT) to find out whether the cancer has spread to the lymph nodes or other areas within the neck. The doctor may use a nuclear medicine scan of the entire body, such as a radionuclide scan known as the "diagnostic I-131 whole body scan," or other imaging tests to learn whether thyroid cancer has spread to distant sites.

Read about how thyroid cancer is treated.