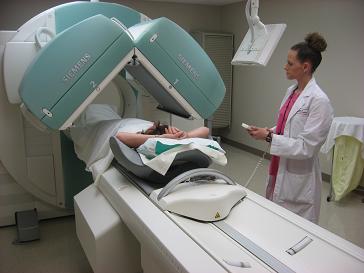 Radionuclide scanning is a diagnostic technique that is based on the detection of radiation emitted by radionuclides (radioactive materials) introduced into the body. Different substances are taken up in different concentrations by different tissues, allowing specific organs to be studied. For example, iodine is taken up mainly by the thyroid gland, so by "tagging" a sample of iodine with a radioactive marker, the thyroid glands uptake of iodine can be monitored to investigate the functioning of the gland.

The radionuclide is swallowed or alternatively injected directly into the bloodstream. It then accumulates in the organ targeted for imaging. The organ then emits radiation in the form of gamma rays, which is detected by a gamma camera and then an image is produced.

Cross-sectional images ("slices") can be obtained by using a computer-controlled gamma camera that rotates around the patient. This specialized form of radionuclide scanning is known as SPECT (single photon emission computed tomography). Moving images can also be taken with the use of a computer; a series of images is recorded immediately following the administration of the radionuclide.


Why it is done

Radionuclide scanning is capable of detecting some disorders at an earlier stage than other types of imaging techniques because changes in the functioning of the organ often occur before the structure of the organ is affected. The technique is also used to detect disorders that affect only the function of the organ.