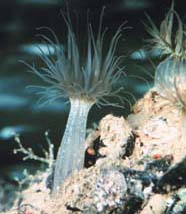 Photo of a cnidarian polyp. 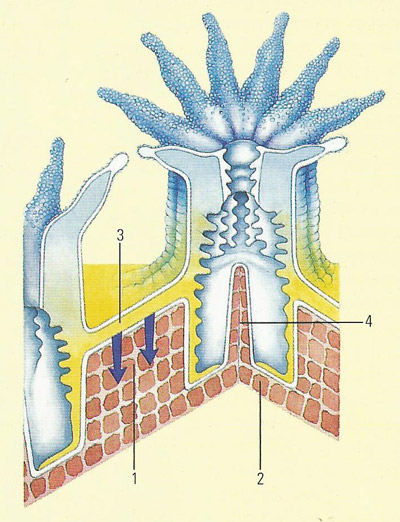 Stony coral polyps obtain support from a mineralized, cup-like theca (1), which is secreted by the animal. The theca, which is composed of minerals absorbed from surrounding seawater, anchors the polyp to the basal structure (2), and to its neighbors in the colony via connecting plates (3). All of the mineralization occurs outside the body, although mineral spikes (4) may provide additional support.

In zoology, a polyp is a sedentary, column-shaped form of cnidarian. Polyps may be solitary individuals or members of a cnidarian colony. They consist of a cylindrical trunk, fixed at one end, with a mouth at the other end, surrounded by a ring of tentacles.

In medical science, juvenile polyps occur in the intestine (usually colon or rectum) of infants or young people; sometimes they are multiple (juvenile polyposis). In the latter form there is a risk (25% of cases) but most juvenile polyps are benign.