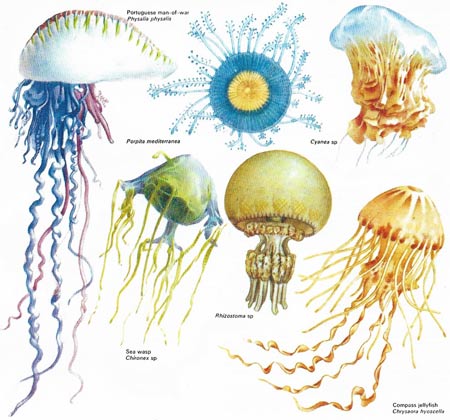 Fig 1. Many beautiful species of jellyfish float in the world's oceans. The Portuguese man-of-war (Physalia sp) is not a true jellyfish but a colony of hydrozoans. The tentacles may grow up to about 18 m (60 ft) long. It feeds mainly on fish up to 30 cm (12 in) in length. Although an inhabitant of tropical waters, it is sometimes found in temperate seas. Species of Chrysaora, Rhizostoma and Cyanea are found in the Atlantic Ocean but they are rarely seen close inshore. The largest species of cyanea (c. arctica) has been recorded as having a bell measuring 3.6 m (12 ft) across, with tentacles more than 30 m (100 ft) long. A jellyfish that lives in warm seas and is responsible for luminescence in the water is Pelagia noctiluca. The sea wasps of the tropical Pacific are among the most dangerous animals known, despite their small size – an overall length of about 30 cm (12 in). They possess a poison that can kill a man in 10 min (and often much sooner). Porpita is a colonial species like Velella. 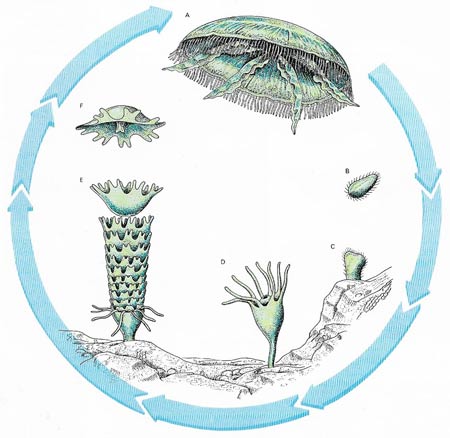 Fig 2. The life cycle of the jellyfish Aurelia includes the adult medusoid form (A) with four violet, horseshoe-shaped gonads round its mouth. Testes and ovaries are on separate individuals. Sperm emerges from the mouth and enters the female's gastric cavity. Each fertilized egg grows into a ciliated larva (B) which is released to settle on a rock or similar surface (C). It grows into a small polyp called a scyphistoma (D) and at the right temperature divides into eight-armed buds called ephyrae (E). These break free (F) to become adult jellyfish. 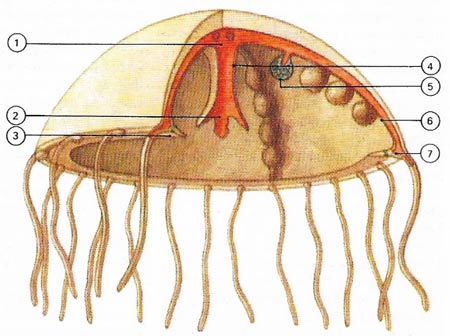 Fig 3. The diagram of a scyphozoan jellyfish shows the gastric cavity (1) opening to the exterior through a mouth (2) at the end of a stalk-like organ (manubrium) (4). The cavity is continuous, via a series of radial canals (6), with a circular canal (7) round the margin of the bell. The margin bears tentacles and sense organs connected by nerve rings (3), the gonads (5) are situated below the umbrella and open into the gastric cavity. 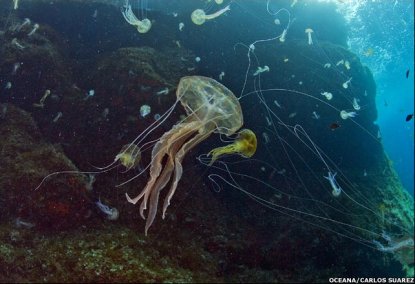 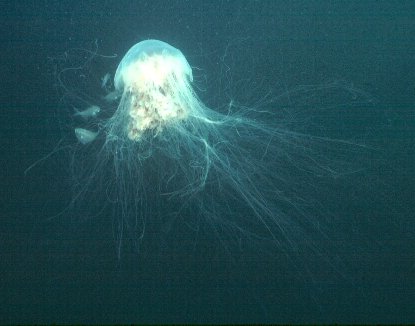 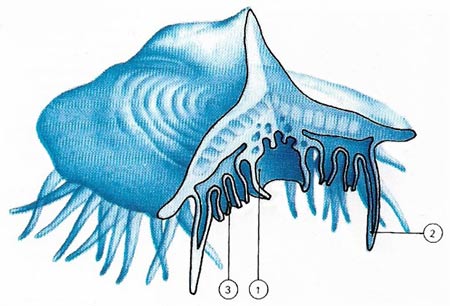 Fig 6. The colonial hydrozoans Velella is made up of a colony that lives at the sea surface. It is supported by an oval float bearing a vertical sail, which allows it to be wind-driven. There are three kinds of polyps; a large feeding polyp just below the float (1); an outer ring of protective polyps with stinging cells (2); and between these tow there is a cluster of reproductive polyps (3).

A jellyfish is a marine cnidarian belonging to the Scyphozoan class. Like all cnidarians, it has an ectoderm (outer layer of cells) separated from an endoderm (inner layer) by jelly-like mesogloea. There is so much mesogloea in the jelly fish that it makes up most of the animal's bulk.

Jellyfish come in diverse shapes and sizes (Fig 1), but all share the basic 'umbrella' form, frequently with a margin fringed with tentacles. The mouth lies at the center of the sub-umbrella surface, usually separated from the gastric cavity proper by an extremely short tube, the manubrium. The corners of the mouth are often drawn out into trailing fronds, the mouth lobes. The fronds consist of membranes, folded and narrowing to a point. In Aurelia (Fig 2), these mouth lobes bear ciliated (hair-fringed) grooves surrounded by nematocysts (stinging cells) that paralyze the small prey on which Aurelia feeds. The cilia sweep the prey up through the mouth and into the gastric cavity where a where abundant stinging capsules paralyze any live creature that has been captured. The process of digestion then takes place.

Many jellyfish are bulky and need an efficient system of moving food, oxygen, and waste products round their bodies. This is provided by a branching series of pouches and radial canals that link the central gastric cavity with a narrow circular canal running round the margin of the bell. The ciliated lining of these canals keeps a current of water circulating freely to carry materials along.

The free-swimming medusoid (jellyfish) stage plays a highly important part in the life of the Scyphozoa. Far from acting as a mere vehicle for the gonads (sex organs), the medusa is the form in which the animal passes most of its life (Fig 3).

Jellyfish swim by a kind of jet propulsion, alternately opening and shutting the bell and so thrusting themselves through the water. The jelly counteracts the movement of the muscles, restoring the animal to the open shape when the muscles relax.

An active free-swimming existence clearly demands more sophisticated sense organs than those that would meet the needs of an animal permanently attached to rocks or seaweed. Many jellyfish have light-sensitive areas near the margin of the bell which detect light intensity and thus the surface of the water. A series of ingenious statocysts (balancing organs permits the animal to stay upright in the water (Fig 7). These two systems are important because jellyfish are slightly denser than seawater and, as a result, sink unless they keep on pulsating. A jellyfish that was unable to distinguish 'up' from 'down' could easily find itself swimming directly towards the sea bottom, and perhaps away from the habitat of its normal prey.