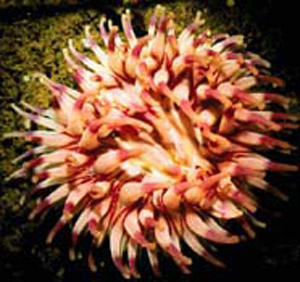 A dahlia sea anemone (Tealia sp.) – an Atlantic coast cnidarian. They can be found stuck firmly to rocks below the upper tide line. When left exposed by the receding tide the anemone reduces itself to a compact, blob-like mass. When covered by water the tentacles expand, ready to trap any small crabs or fish that stray within reach. Photo: Andy Bruckner.

A cnidarian is a member of the phylum Cnidaria, a group of aquatic (mostly marine) invertebrates which includes corals, Hydra, jellyfish, sea anemones, sea pens, sea fans, and sea whips.

Cnidarians exist both as free-swimming medusae (such as jellyfish) and as sedentary polyps. The latter may be solitary (e.g., sea anemones and Hydra) or colonial (e.g., corals). In many cnidarians the life cycle alternates between these two forms (see alternation of generations).

Cnidarians are diploblastic, with two cell layers (ectoderm and endoderm) separated by mesoglea, and have radial symmetry. The body cavity, known as the coelenteron, , serves as a gut and as a hydrostatic skeleton, and in some groups eggs and sperm are discharged into it. The coelenteron has a single opening, closable by a sphincter, which doubles as both mouth and anus.

Unique to cnidarians are stinging cells known as cnidocytes (nematocytes), which are used for defense or capturing prey.

The life-history of the common jellyfish Aurelia aurita is representative of all cnidarians. The eggs of the jellyfish are shed into the water and hatch into minute larvae which at first swim about and then settle down on a rock. Each larva then grows into a little tubular creature with a crown of tentacles, very much like a Hydra and clearly a polyp. After a time the body becomes deeply constricted at short intervals along its length, so that it looks like a pile of saucers, and the tentacles disappear. Then the "saucers" break away in turn, from the top, and each them reveals itself as a tiny jellyfish which will grow into an adult Aurelia aurita. Many cnidarians have this alternation of generations and many also reproduce by budding off new individuals.

The phylum Cnidaria is divided into several classes. Among these are the following.

Sea anemones (order Actinaria) and corals make up this class. Sea anemones are large, single polyps with many tentacles, often beautifully colored and resembling flowers. They are found mostly in cold waters and are common in rock pools on the shore. Corals are more characteristic of tropical seas. They usually grow in masses, the polyps touching and merging into each other. Most of them secrete hard skeletons of calcium carbonate, and the skeletons of marine corals form coral reefs.

The anthozoans fall into two subclasses: the Zoantharia, which includes the reef-building corals and the sea anemones; and the Alcyonaria, soft corals and sea fans. These have polyps with eight tentacles, and most of them do not have hard, stony skeletons. The exception to this is the precious red Mediterranean coral, which, though an alcyonarian, has such a skeleton.

This class includes the true jellyfish, which are all medusae (though they may go through a polyp stage) and which float in the waters of the sea. A typical jellyfish is like an inverted bowl; its mouth is in the middle of its under-surface and its tentacles hang down from the edge. Some jellyfish grow to a great size; the "lion's mane" jellyfish (Cyanea capitata) may reach 7 ft in diameter and have tentacles 100 ft long. Some tropical scyphozoans sting severely or even dangerously.