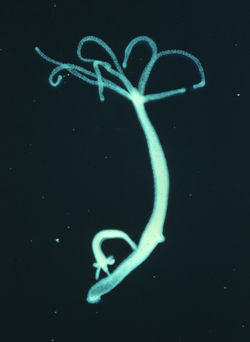 Hydra is a genus of small, freshwater cnidarians (coelenterates) which belong to the class Hydrozoa. Hydra attach themselves to submerged rocks, leaves, and twigs, and stretch out their tentacles, or cnidae, to capture passing prey. Unlike most hydrozoa, which spend at least part of their lives in a free-swimming form, Hydra exists only as polyps. They are typically a few millimeters long.

Under the microscope, the body wall, and that of the hollow tentacles, is seen to be composed of two cell layers. The ectoderm is on the outside and the endoderm is the inner layer. Between the two there is a thin layer of jelly-like material called the mesoglea. Most of the cells taper at one end and the spaces between them are filled with interstitial cells – small unspecialized cells that help make good any injury to the animal. The cells of the ectoderm have at their bases (i.e., their inner edges) muscular projections called muscle tails. These lie along the length of the animal in the mesoglea. When they contract, the animal gets shorter. By contracting the muscle tails on one side only, the animal can bend in any direction. The cells of the endoderm also have muscle tails but these run around the body. Their contraction makes the body long and thin. A simple network of nerves in the body wall controls the actions of the muscle tails.

Hydra feeds on a variety of small aquatic animals, such as Daphnia and Cyclops, which it catches by means of lots of tiny stinging cells on its tentacles. Scattered over the outer layer tentacles are a great many of these stinging cells called cnidoblasts. Smaller numbers occur on the main body. Each cnidoblast contains a capsule (nematocyst) from which projects a small "trigger" called a cnidocil (pronounced nid-o-sill). Inside each capsule is a tiny hollow thread. It is inverted like a finger of a glove which is pushed into the hand part. These threads are the food-catching apparatus.

There are several types of thread, each with a special function. When an animal brushes against a tentacle, it disturbs some of the triggers. This causes the threads to be shot out of the capsules. Some of the threads have barbs which penetrate the skin of the prey and inject a poison. Although the amount of poison is minute, creatures like water fleas are rapidly paralyzed, for the poison is, volume for volume, nearly as strong as cobra venom. Other threads are coiled or sticky and help to ensnare the prey. When a stinging cell has been discharged it is useless and must be replaced. New ones are formed all the while from the unspecialized interstitial cells in the body. They have a remarkable ability to migrate through the body to the place on the tentacles where they are required. It appears that when the stinging cells penetrate they prey, proteins set free from the prey stimulate Hydra to open its mouth and to curl the tentacles towards it. The food is put into the mouth and digestion begins. The gut of Hydra is simply the hollow cavity within the body and has only one opening, the mouth. Enzymes are produced by special cells in the endodermis and released into the gut cavity. These enzymes begin to break down the food into smaller particles. Other lining cells have long hair-like flagella that wave about and keep the contents of the gut well mixed. A further type of lining cell acts rather like an amoeba and engulfs small particles. Digestion is completed inside these cells in food vacuoles and the products are diffused over the rest of the body. Undigested food is passed out of the cells into the gut cavity and from there to the outside through the mouth. Digestion in Hydra therefore can be divided into two phases, the preliminary digestion outside the cells of the endodermis (extracellular), and the secondary phase inside the cells (intracellular). The main digestion is extracellular. The cells of the gut merely absorb the digested remains. In all cnidarians (corals, hydroids, jellyfish, sea anemones, etc) digestion is partly extracellular and partly intracellular. Because the body wall is only two cells thick and is surrounded by water on both sides, no special organs are required to obtain oxygen or to get rid of waste matter. These substances merely diffuse in and out of cells. A circulation system is unnecessary for carrying dissolved gases and nutrients around the body.

During warm weather, when food is easily obtained, Hydra reproduces by budding. The body wall grows at some point or points near the base and forms a bulge. A mouth and tentacles develop at the end of the bulge and the new animal becomes separated from the parent. It may drift around in the water for a few days before becoming attached. Even small broken parts of Hydra can grow into complete individuals as long as certain amounts of both ectoderm and endoderm are present. In some related animals, e.g. Obelia), budding occurs frequently but the new individuals do not separate. They all remain together and build up a branching colony.

Hydra can also reproduce sexually. Male and female structure sometimes occur on one individual but in most species the sexes are separate. In the autumn, testes appear near the tentacles and ovaries near the base. They, and the sex cells they produce, develop from the interstitial cells. Both male and female structures develop as swellings on the body but the male structures contain lost of sperm cells and the ovaries, only a single egg. When ripe, the male cells are shed into the water. Most of them perish but some reach and join with female cells. The zygotes so formed begin to divide rapidly and form balls of cells. These form a protective layer around themselves and drop off from the parent to spend the winter in the mud. When the water warms up in the spring, the cells break through the protective coat and grow into a new Hydra.


Discovery that Hydra are animals

In 1740 a Swiss naturalist, Abraham Trembley, was acting as a tutor to the children of Count Bentinck in Holland. In his spare time he collected and observed living creatures, and one day he found some objects in a pond which he thought at first were tiny plants, because they were green and consisted of a stalk with a crown of thread-like "petals". But he noticed that when the bottle in which they were kept was jarred they contracted to little specks of jelly, later opening out again. This made him wonder if perhaps they were animals, and he decided to cut one in half and see if the two halves lived and regenerated. If they did, he thought, this would prove the organism to be a plant. They did live and regenerate, and the same thing happened when the creature was cut into smaller fragments.

Before he had completed his experiments the French scientist Réamur had pronounced this organism, which was then known as a "freshwater polyp", to be an animal. Trembley heard of this and made experiments on the movements and feeding habits of the polyp which led him to entirely agree with Réamur. Here was an animal which could grow into a new individual from as "cutting", as if it were a carnation or a poplar tree. Today we are used to the idea of animals regenerating, like starfish, but at that time the notion of regeneration seemed fantastic, and the news caused a great stir. Réamur reported the matter to the king of France, and relates in his memoirs that "His Majesty appeared to be very pleased to hear about". Trembley's little polyps, first described by the Dutch inventor of the microscope, van Leeuwenhoek, became known by the name Hydra.

The majority of cnidarians live in the sea. Hydra is an exception. There are many colonial animals, such as Obelia, that are related to Hydra. Corals and sea-anemones are also related, though not so closely. These animals contain a lot of vertical folds in the body, which increase the area for food absorption. Jellyfish may be likened to flattened Hydras swimming upside down. The hollow gut exists as a number of canals. The power of the stinging cells of jellyfish is well known to bathers in warm seas.

For information on the legendary monster of the same name, see the Hydra article in the Encyclopedia of History.