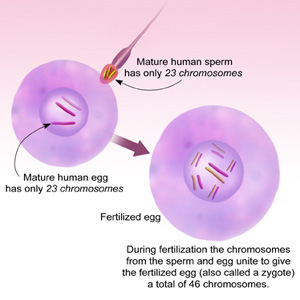 Formation of a zygote by fertilization. Credit: National Institutes of Health.

A zygote is the product of the fusion of an ovum (egg) and a sperm. It contains two copies of each chromosome, one from each parent. Egg and sperms cells, on the other hand, each contain only one copy of each chromosome. The zygote develops into an embryo.


From egg to embryo

A single sperm penetrates the mother's egg cell, and the resulting cell is called a zygote. The zygote contains all of the genetic information (DNA) necessary to become a child. Half of the genetic information comes from the mother's egg and half from the father's sperm. The zygote spends the next few days traveling down the Fallopian tube and divides to form a ball of cells.

The cells of the embryo now multiply and begin to take on specific functions. This process is called differentiation. It leads to the various cell types that make up a human being (such as blood cells, kidney cells, and nerve cells).